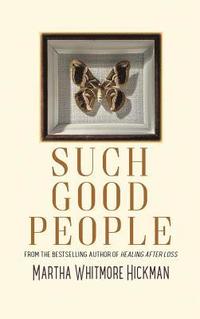 Laura Randall and her professor husband, Trace, are proud of their accomplishments, even as they try to balance their own identities with increasingly independent children and while caring for their aging parents. Their college-age sons, Bart and Philip, see the family as a reassuring touchstone as they begin building their adult lives. And for independent, vivacious, sixteen-year-old Annie, the Randalls' only daughter, the family is both a much-loved support, and an obstacle, as she struggles to discover her own awakening dreams and needs.

Then Annie dies in an unforeseeable accident?and their family?s world is turned upside down.
Visa hela texten

a first novel that, beginning with its title, begs comparison to judith guest's ordinary people, by an author best known for her nonfiction writing on grief (healing after loss, not reviewed, etc.). hickman tells her quiet story through the eyes of laura randall, whose very name cries out ordinariness. she's married to a good-natured engineer, trace, who takes comfort in facts and who isn't much for emotional expression--a common, likable sort whom laura still loves dearly after many years. they have three children, two boys about to graduate from college and a 16-year-old daughter, annie. as the story begins, the family is trying to cope with the death of laura's father and with her mother's grief, and hickman captures in near-photographic detail the likable, contrary, selfish, and generous attitudes of a nice family dealing with the grieving widow and with one another. in bed, laura discusses with trace annie's sudden burst into near-adulthood--she's having sex with her boyfriend, what does he think about that? they both think some issues may get settled on the family vacation in colorado, but once there, suddenly and meaninglessly, annie's killed while horseback riding. then, evenhandedly and with great assurance, hickman charts the course of loss and recovery for each family member. and she excels in the small, telling detail: when laura goes to the gym, for instance, where she and annie shared a locker, she can't remember the combination and realizes that she always depended on annie to remember. the story ends with the moving closure of its first scenes: the grandmother's death. it seems genuinely redemptive. hickman's debut fiction will require at least one box of kleenex per reading, but, given its almost stridently modest aims, it's extremely well done.