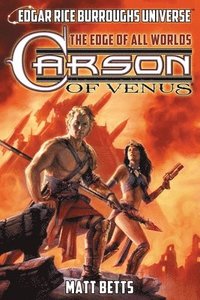 The Edge of All Worlds (Edgar Rice Burroughs Universe)

When a mysterious enemy attacks his adopted nation of Korva, Earthman Carson Napier discovers his own arrival on Venus years ago may have unknowingly triggered the strike. The invaders? trail of death and destruction leads Carson and his beloved princess Duare headlong into battle against a seemingly invincible, primordial race. But that is not Carson?s only challenge, for an uncanny phenomenon has entangled him with two strange individuals from beyond spacetime. Will Carson be able to solve the mysteries of his past and the enigmatic visitors before the entire planet descends into chaos?

The very principle of physics behind the Gridley Wave has mysteriously failed, cutting off all communication between the hollow world of Pellucidar and the outer crust, and now inventor Jason Gridley must seek help from his brilliant young protégé, Victory Harben. Together they recover timeworn records from deep in the ruins of a dead Mahar city, hoping to use knowledge of Pellucidar?s former reptilian overlords to jumpstart the Gridley Wave. But when their experiment goes terribly wrong, Jason and Victory suddenly find themselves drawn into the inscrutable machinations of an ancient evil.

THE FIRST UNIVERSE OF ITS KIND

A century before the term ?crossover? became a buzzword in popular culture, Edgar Rice Burroughs created the first expansive, fully cohesive literary universe. Coexisting in this vast cosmos was a pantheon of immortal heroes and heroines?Tarzan of the Apes, Jane Clayton, John Carter, Dejah Thoris, Carson Napier, and David Innes being only the best known among them. In Burroughs? 80-plus novels, their epic adventures transported them to the strange and exotic worlds of Barsoom, Amtor, Pellucidar, Caspak, and Va-nah, as well as the lost civilizations of Earth and even realms beyond the farthest star. Now the Edgar Rice Burroughs Universe expands in an all-new series of canonical novels written by today?s talented authors!

When an unknown force catapults inventors Jason Gridley and Victory Harben from their home in Pellucidar, separating them from each other and flinging them across space and time, they embark on a grand tour of strange, wondrous worlds. As their search for one another leads them to the realms of Amtor, Barsoom, and other worlds even more distant and outlandish, Jason and Victory will meet heroes and heroines of unparalleled courage and ability: Carson Napier, Tarzan, John Carter, and more. With the help of their intrepid...
Visa hela texten

“it’s impossible to say this too strongly: this steampunk-horror-historical-thriller crossbreed is an amazing book. word of mouth could turn this from an under-the-radar debut novel from a little-known imprint into a genre-busting cult classic. get on board now.” —david pitt, Booklist on Odd Men Out (starred review)

“the stakes are high and the action and surprises are nonstop as betts skillfully mixes elements of steampunk, alternate history, science fiction, and horror.” —Publishers Weekly on Odd Men Out

“a compelling story line, light humor, and a steampunk vibe make this an interesting and fun read.” ­—Library Journal on Odd Men Out

"carey's experience allows him to mimic [edgar rice burroughs'] style so closely you almost wonder if the story came from some dusty vault in tarzana, california... if you are an erb fan like me, this book will easily transport you back to your youth." —andy nunez, Ares Magazine on Swords Against the Moon Men

"i've stated in a previous review that i regard christopher paul carey as the best heroic fantasy author currently working and i see no reason here to change that opinion." —dave brzeski, the british fantasy society on Swords Against the Moon Men

“[The Song of Kwasin] possesses and organic, unified feel, and a high level of storytelling craft. The legacy of the Khokarsa cycle is continued in honorable and entertaining fashion.” —Paul Di Filippo, Locus Online on The Song of Kwasin

Matt Betts is the author of such science fiction novels as the critically recognized adventure Odd Men Out and its sequel Red Gear Nine, the urban fantasy Indelible Ink, the giant monster vs. giant robot book The Shadow beneath the Waves, and the cryptid horror tale White Anvil: Sasquatch Onslaught. He is also an accomplished speculative poet, and lives in Ohio with his wife and children. Christopher Paul Carey is the author of several books, including Swords Against the Moon Men-an authorized sequel to Edgar Rice Burroughs' The Moon Maid-and the forthcoming ERB Universe novel Victory Harben: Fires of Halos. He has also scripted comic books featuring Burroughs' characters such as Tarzan, Dejah Thoris, and Carson of Venus. He is Director of Publishing at Edgar Rice Burroughs, Inc., and the creative director of the Edgar Rice Burroughs Universe series. The creator of the immortal characters Tarzan of the Apes, John Carter of Mars, and Carson of Venus, Edgar Rice Burroughs is one of the world's most popular authors. Mr. Burroughs' timeless tales of heroes and heroines transport readers from the jungles of Africa and the dead sea bottoms of Barsoom to the miles-high forests of Amtor and the savage inner world of Pellucidar, and even to alien civilizations beyond the farthest star. Mr. Burroughs' books are estimated to have sold hundreds of millions of copies, and they have spawned 60 films and 250 television episodes.

epilogue: into the unknown 203

pellucidar: dark of the sun