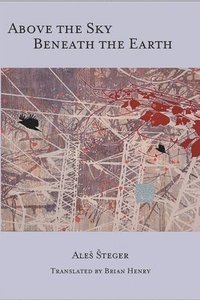 Above the Sky Beneath the Earth

av Ales Steger
Häftad Engelska, 2019-10-17
169
Köp
Spara som favorit
Steger's poems are harrowing and hilarious, unnerving and weirdly familiar-and, most of all, ambitious in its attempt to look anew into our all-too-human darkness.
Visa hela texten

"Translator Brian Henry, best known for his translation of Tomaz Salamun's Woods and Chalices, praises "the philosophical and lyrical sophistication of [Steger's] poems," and has achieved that same sophistication in translation." Three Percent "In giving quotidian objects a voice in his poetry, Steger gives us a vision that is focused, omniscient, and obsessive." Rattle "The prolific poet Brian Henry renders Steger's long lines in an unfailingly fluent American English." Publishers Weekly "Above the Sky Beneath the Earth is one of those rare books of poems that can be read in one breath due to its pureness." Delo newspaper "One of the most original European poets witing today." Citation for the Bavarian Academy of Arts International Bienek Prize for Poetry "Each one of his books is an extraordinary event." Durs Grunbein