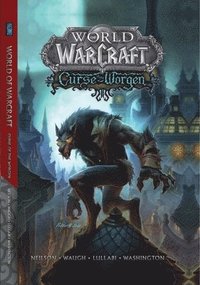 World of Warcraft: Curse of the Worgen

av Micky Neilson
(1 röst)
Inbunden Engelska, 2019-03-14
179
Köp
Spara som favorit
Fåtal ex i lager. Skickas inom 1-2 vardagar.
Fri frakt inom Sverige för privatpersoner.
The world's most popular massively multiplayer online videogame continues its exodus into comics with this new graphic novel. The best-selling WORLD OF WARCRAFT comic series returns in time for a worldwide cataclysm! A series of grisly, animalistic murders have rocked the walled town of Gilneas. A famous detective sets out to discover the perpetrators and finds far more than he bargained for. To find the truth, he must delve through years of twisted history - both the history of his family and Gilneas itself.
Visa hela texten

Bloggat om World of Warcraft: Curse of the Worgen

Micky Neilson is a two-time New York Times best-selling author whose graphic novels, Ashbringer (#2 on the list) and Pearl of Pandaria (#3) have both been published in six languages. As one of the first writers at Blizzard Entertainment, he has more than two decades of experience in the cutting edge of the gaming industry. In 2016 Riverdale Avenue Press published his memoir Lost and Found: An Autobiography About Discovering Family, available wherever books are sold. He has also self-published his first full-length horror novel, The Turning, and its prequel, Whisper Lake, both on Amazon. In 2017 Micky was tapped to write the comic book series The Howling: Revenge of the Werewolf Queen, a continuation of the beloved 1981 Joe Dante horror film The Howling. Also in 2017 Micky completed the Call of Duty Field Manual, a companion book to the best-selling video game Call of Duty World War II. Most recently, Micky has written his first original sci-fi novel, Ridgerunners.