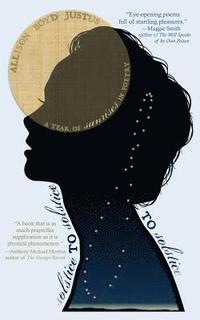 av Alternating Current, Allison Boyd Justus
Häftad Engelska, 2017-03-20
194
Köp
Spara som favorit
Against a backdrop of loss and exhaustion, in the searching tradition of Walden, Bluets, and Pilgrim at Tinker Creek, the speaker of Solstice to Solstice to Solstice chronicles the in-breaking of day in a quest to see and to be seared by seeing, to know what can be known, to find truth sturdy as clapboards and joy robust enough to get her through each coming day. Allison Boyd Justus' collection of freeform and prose poetry captures every sunrise during the 2009-10 solar year-from solstice to solstice and back to solstice-and each cyclical dawn brings something new and fresh, bursting with color, internal compasses, and astronomical guides. Through it all, beauty, introspection, hope, and felicity remind us to embrace every day in its new light.~~~~~~~~~~"Justus reminds us that observation is one of the most important parts of being alive: just noting change and presence. She forces attention to the small things, and even though the sky is the star, the speaker takes on a supporting role. By the end, it seems that both the sun and the speaker have learned something in their year: they're back where they started, but also further along. There's something about witnessing dawn, each day-knowing, this is new, and untouched."-Micah Ling,author of Three Islands, Sweetgrass, Settlement, and Flashes of Life~~~~~~~~~~"In Solstice to Solstice to Solstice, Allison Boyd Justus gives us 366 mornings of sunrises during a single solar year, 366 blank slates, 366 chances to perceive and create something new. These eye-opening poems are like mornings themselves, full of startling pleasures: 'light brilliant as fact,' 'the mountain a shudder,' 'a murmuration of starlings rattl[ing] like a tambourine.' Justus shows us, poem after poem, that each day is a page where anything might be written."-Maggie Smith,author of The Well Speaks of Its Own Poison, Lamp of the Body, and The List of Dangers~~~~~~~~~~~"In Solstice to Solstice to Solstice, Allison Boyd Justus chronicles one year's worth of sunrises, from one December 21st to the next, a document that is as much prayerlike supplication as it is physical phenomenon. Each morning takes shape, almost insecure about its inevitable happening: our counter-course reading from left to right orients us as Justus' writing dispels the dark."-Anthony Michael Morena,author of The Voyager Record: A Transmission~~~~~~~~~~Find out more at tinyurl.com/solsticetosolstice
Visa hela texten