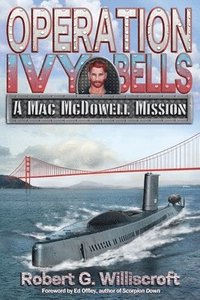 Operation Ivy Bells: A Mac McDowell Missionupdates the popular bestseller by Robert G. Williscroft, a lifelong adventurer who blends his own experiences with real events to craft a military thriller that will take your breath away.
Visa hela texten

"robert williscroft has produced quite a sea story, a colorful and enjoyable work that explains one of the little-known successes of the cold war, with plenty of fascinating detail about submarine and diving operations."

"action-adventure stories about submarines and diving have become a popular genre. tom clancy and clive cussler come to mind as exemplars. but robert williscroft really raises the bar with this book. not only is he an outstanding writer, but he is also a ‘doer,’ having participated in the events in Operation Ivy Bells: A Mac McDowell Mission.”