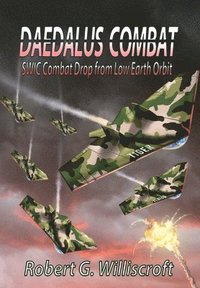 av Robert G Williscroft
Inbunden Engelska, 2019-11-15
209
Köp
Spara som favorit
Skickas inom 10-15 vardagar.
Fri frakt inom Sverige för privatpersoner.
Finns även som
Visa alla 2 format & utgåvor
A U.S. senator?likely next president?has been seized by pirates and held for $100 million ransom. Derek ?Tiger? Baily and his SEAL Winged Insertion Command (SWIC-3) get the call: a rescue operation with soldiers zooming in from the sky, the 6-man squad?s first real combat operation. Hurtling around the world in the new Gryphon-10 MK 4 hardshell wingsuit, Tiger and his team must literally improvise on the fly with everything to lose. Go into battle with Tiger and the SWIC on a mission of life or death in Robert G. Williscroft?s fourth installment following Daedalus, Daedalus LEO, and Daedalus Squad.
Visa hela texten

"Daedalus Combat is a fi tting conclusion to and culmination of the other three stories in Williscroft’s action-packed, hard science-fi ction series, The SWIC Daedalus Files. When Pirates snatch a U.S. Senator and probable next President from a ship and hold him for one hundred million dollars ransom, the Navy SEALS quickly move to rescue him. Once again Derek “Tiger” Baily’s six-man SWIC squad is featured, only this time, the operation is “dramatically different from anything any warrior had ever done before.” Why? Because it’s the first time anyone has ever 'dropped from LEO [Low Earth Orbit] into a combat scenario.' It’s the full nature of this combat scenario that is the real “Wow” factor here. All the different units of the military machine must work together if the mission is to succeed. The action and suspense are intense, and they kept me turning the pages until the very end."

Former Chairman of the Board, Horror Writers Association

Author of The Inspector of the Cross Series

"the test and training runs are over; now it’s time for the swic to see real action. williscroft’s latest, Daedalus Combat, literally starts with a bang and keeps on going..."

Author of The T-Space Series

"this final short story by author robert williscroft brings lt. cdr. derek “tiger” baily into a rescue mission with no margin for error. sporting the newest version of the fully-armed wingsuit (the Gryphon 10 Mk 4), Tiger and his squad must rescue a U.S. Senator—and presumed future President—who is being held for ransom by pirates. Each of the Daedalus adventures, told through the voice of Tiger, is a short story, and I’d encourage fans of sci-fi and military thrillers to read them in the order they were published—they stitch together smoothly into a comprehensive tale of adventure and suspense. In Daedalus Combat, author Williscroft demonstrates his knowledge of military tactics and equipment to paint an all-too-realistic picture of what could be tomorrow’s headlines. This is an exciting, hard-charging read that is sure to satisfy thriller and sci-fi readers."