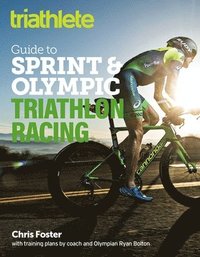 av Chris Foster, Ryan Bolton
Häftad Engelska, 2020-04-23
269
Köp
Spara som favorit
Skickas inom 7-10 vardagar.
Fri frakt inom Sverige för privatpersoner.
Finns även som
Visa alla 1 format & utgåvor
The Triathlete Guide to Sprint and Olympic Triathlon Racing will help you discover the speed, thrill, and challenge of triathlon's most popular race distances. Not everyone has time to train for long-course triathlons. By pursuing triathlon's shorter distances, you can enjoy all the total body fitness benefits of the swim-bike-run sport and discover the unique challenges of short-course racing-all while enjoying a life outside of training. This complete guide from former pro triathletes Chris Foster and coach Ryan Bolton shares all the know-how you need to find speed and enjoy successful racing in sprint and Olympic-distance triathlons. Foster, now the Senior Editor of Triathlete magazine, shares his pro advice for how to set a smart race strategy, how to master triathlon pacing, how to execute fast transitions, how to train to improve your weakness and race to your strengths. Bolton offers smart, effective sprint and Olympic triathlon training plans so you can get started right away, no matter your background. Sprint and Olympic triathlons are triathlon's most popular distances for good reasons. Experienced triathletes returning to the short course will enjoy a break from long, slow hours of training and rediscover the joy of speed. Active people looking for a new challenge can jump right into triathlon's most beginner-friendly distances. The Triathlete Guide to Sprint and Olympic Triathlon Racing makes it simple to get back up to speed in the world's most rewarding endurance sport.
Visa hela texten

"Whether you're new to triathlon or a seasoned veteran, Chris and Ryan present information and detailed instruction in a clear and concise manner. This is one of those books that you can keep coming back to for specific training as well as general ideas. Keep it in an easy-to-reach spot on your bookshelf!" -Andy Potts, 2007 Ironman 70.3 World Champion, 2004 Olympic triathlete "This book provides excellent guidance and great training plans for the short-course triathlete. I highly recommend it." -Joe Friel, best-selling author of The Triathlete's Training Bible "Our very own guide to short-course racing breaks down everything you need to know about sprint- and Olympic-distance tri. Three 16-week plans that range from absolute beginner to podium-bound racer make this a must-have for any level triathlete." -Triathlete magazine

Chris Foster is Triathlete magazine's Senior Editor and a former professional short-course triathlete. From gear recommendations to training tips from professional triathletes, Chris makes the challenges of triathlon more approachable and awakens the competitive drive that leads triathletes to see just how fast they can be. He was an NCAA Division 1 runner for Penn State before graduating with a degree in Journalism. After moving to Southern California to be a part of the triathlon scene, Foster worked at the Triathlon Lab retail store while training and racing. Foster was coached by Bernard Baski (TriFit), Gerry Rodrigues (Tower 26), and Siri Lindley to become a member of the U.S. national triathlon team and represent the U.S. at the 2010 Elite World Championships race. He was in the running for a 2012 London Olympic team berth before a car hit him during a ride and derailed his training. Foster turned to racing non-draft legal, short-course triathlons like Hy-Vee, Life Time Triathlon series, and Rev3 before transforming his racing experience to a career in freelance writing and journalism. Foster now focuses on training and gear for Triathlete magazine. Ryan Bolton is a former Olympic triathlete and the owner and founder of Bolton Endurance Sports Training (BEST). In 2000, he represented the United States in the Sydney Olympics and then went on to compete at a top level in long course triathlon racing. His race resume includes many international victories in Olympic triathlons, Ironman, and Ironman 70.3 race distances. In addition to his experience as a pro, Bolton holds an M.S. in Human Nutrition, with an emphasis on stress metabolism, and a B.A. in Exercise Physiology. He coaches world-class professional runners and triathletes, Olympians, and amateur runners, cyclists, and triathletes from around the world. In 2009, Bolton formed The Harambee Project in Santa Fe, NM, a group of elite distance runners, including the 2015 Boston marathon champion, Caroline Rotich. Bolton also participates in speaking engagements and endurance sports camps domestically.