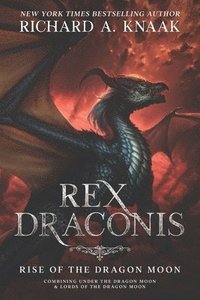 Rise of the Dragon Moon

av Knaak Richard A Knaak
Häftad Engelska, 2021-09-15
239
Köp
Spara som favorit
A world of minotaurs, knights, wizards, dwarves, elves, dragons, and more. A world familiar, yet a world new. A world where gods intrude at their whim. A world created by the author of The Legend of Huma, Kaz the Minotaur, the Dragonrealm, and more.

And a world where a great leviathan is said to watch over gods and the younger races, preparing to judge each as it sees fit.

As is its right.

Combing the first two tales of the Rex Draconis saga!

UNDER THE DRAGON MOON

When the minotaur captain Rath and his fellow survivors manage to escape the piratical wheyr after stumbling across them on an island, they and others discover too late that something ancient came with.

LORDS OF THE DRAGON MOON

As the Shatter's fiery influence spreads, events unfold that force the minotaur Rath and his surviving crew to remain in the port of Aryon. However, Rath, the knight Erik, the elven mystic Kaldara, and others discover themselves caught up in a fantastic plot to subvert the very will of the gods and create new lords to rule over all Tiberos.

But some of the gods have taken notice...
Visa hela texten