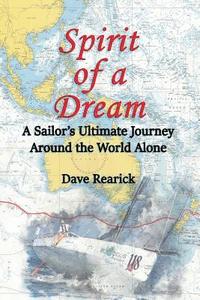 Spirit of a Dream

A Sailor's Ultimate Journey Around the World Alone

av Dave Rearick
Häftad Engelska, 2018-10-01
229
Köp
Spara som favorit
Skickas inom 10-15 vardagar.
Fri frakt inom Sverige för privatpersoner.
Finns även som
Visa alla 1 format & utgåvor
On October 2, 2013, Dave Rearick began an epic solo voyage around the world. Onboard his specifically built Class 40 racing sloop appropriately named ?Bodacious Dream,? Dave sailed from Newport, Rhode Island. He sailed the length of the Atlantic Ocean to Cape Town, South Africa, a distance of 8,000 miles. From Cape Town, Dave sailed to Wellington, New Zealand where ?Bo? was originally built, and then onto the fabled Galapagos Islands, one of the earth?s great nature preserves. On the final leg, Dave returned to Newport, Rhode Island by way of the Panama Canal. The full circumnavigation took 256 days to complete, leaving an indelible memory of the challenges and rewards of being at one with nature, the solitude of the open sea and the ever-changing landscape of life.

At the age of 12, Dave Rearick was introduced to sailing on a small boat. By the age of 14, he was captivated by the stories of legendary sailors who raced or sailed single-handed around the world. Forty years later, in 2011, now age 54, Dave finally began his quest to race on-board in the Singlehanded Global Ocean Race. When the race was canceled, Dave, undaunted, continued his quest and embarked on the long-dreamed adventure that became a challenging journey of learning and discovery.

Join Dave and Bodacious Dream as they navigate the oceans of the world alone and the personal challenges met along the way.

Bloggat om Spirit of a Dream

Growing up on the southern shores of Lake Michigan, Dave Rearick learned to sail at age 12. From those first sails off the beach, his dream has taken him around the world. When he's on the ocean, he claims, "the world is my playground!"

His impassioned storytelling, sometimes humorous, other times poignant, belies an underlying calm emanating from a soul that finds peace on the water. He has written for many sailing publications and with his first book, Spirit of a Dream, takes you on a thrilling adventure around the world alone, privately sharing his deep, passionate feelings for the spirit and waters of the planet.


Over his 40-year sailing career, much of which he sailed singlehanded, Dave won many prestigious races, including the Chicago Race to Mackinac and The Atlantic Cup. He was presented the Mike Silverthorne award by the Great Lakes Singlehanded Society in 2003 and serves as an ambassador for 11th Hour Racing, a program of the prestigious Schmidt Family Foundation.

With all that behind him, Dave still claims his most significant accomplishment in life, other than wearing out hundreds of t-shirts, hats, and sailing shoes, is that of sharing sailing and the water with so many kids and adults over the years. He continues to live on the Southern Shore of Lake Michigan, a stone's throw from where he began his sailing and he'll be the first to tell you, with a wink, he never got very far in life.

If by Rudyard Kipling