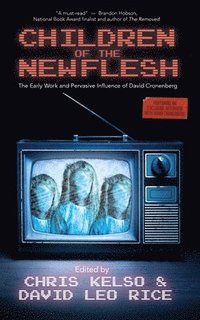 av Chris Kelso, David Leo Rice
Häftad Engelska, 2022-06-30
305
Bevaka
Spara som favorit
Tillfälligt slut – klicka "Bevaka" för att få ett mejl så fort boken går att köpa igen.
Children of the New Flesh is a wide-ranging compendium of reflections on the enduring impact of David Cronenberg, one of the most significant filmmakers of all time. Focusing on a series of short films that Cronenberg directed in the 1960s and 70s, many of which have rarely been seen, this book considers the legacy of these works in their own right, as well as their relationship to future masterpieces like Videodrome, The Fly, Dead Ringers, and eXistenZ.

Much more than a work of tribute, Children of the New Flesh is a meditation on the nature of influence itself. It teases out the undercurrents in Cronenberg's films, obsessed as they are with secret signals, sinister experiments, and mental viruses, and shows how these ideas resonate in our own paranoid, sickened, hyper-networked times.

Featuring original fiction and essays from luminaries such as Brian Evenson, Blake Butler, Michael Cisco, Graham Rae, Joe Koch, Gary J. Shipley, Tobias Carroll, and Charlene Elsby, and interviews with figures such as Kathe Koja, Patrick McGrath, Tim Lucas, and Bruce Wagner-not to mention an exclusive interview with Cronenberg himself-this book is at once a study and a living example of the singular power of hybrid forms. It's an invitation to seek undead materials in the dark recesses of the past, and to use them as a means of tuning into the freakish wavelengths of the present.

"CHILDREN OF THE NEW FLESH IS A MUST-READ FOR FILM FANATICS AND FANS OF DAVID CRONENBERG. EDITED BY CHRIS KELSO AND DAVID LEO RICE, THIS COLLECTION EXPLORES THE DARK PERIPHERIES OF CRONENBERG'S INFLUENCE AND EARLY WORK, EXAMINING A WORLD OF STRANGENESS AND MYSTERY." - BRANDON HOBSON, NATIONAL BOOK AWARD FINALIST AND AUTHOR OF THE REMOVED


"DO NOT OVEREMPHASIZE CRONENBERG'S LOVE AFFAIR WITH THE PHYSICAL BODY; THAT DOES A DISSERVICE TO HIS DEEP, ABIDING, PASSIONATE INTEREST IN THE ENERGY BODY, THE ETHEREAL BODY, THE BODY DOUBLE, THE COSMIC BODY. IN THE END, HE IS A CONSUMMATE PHILOSOPHER OF THE SPIRIT." - BRUCE WAGNER, AUTHOR OF DEAD STARS, MAPS TO THE STARS, AND THE MARVEL UNIVERSE