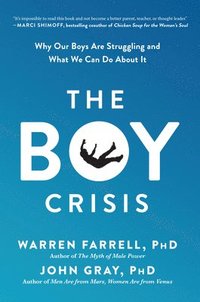 av Warren Farrell, John Gray
Häftad Engelska, 2019-03-14
189
Köp
Spara som favorit
Skickas inom 5-8 vardagar.
Fri frakt inom Sverige för privatpersoner.
Finns även som
Visa alla 4 format & utgåvor
What is the boy crisis? It's a crisis of education. Worldwide, boys are 50 percent less likely than girls to meet basic proficiency in reading, math, and science. It's a crisis of mental health. ADHD is on the rise. And as boys become young men, their suicide rates go from equal to girls to six times that of young women. It's a crisis of fathering. Boys are growing up with less-involved fathers and are more likely to drop out of school, drink, do drugs, become delinquent, and end up in prison. It's a crisis of purpose. Boys' old sense of purpose-being a warrior, a leader, or a sole breadwinner-are fading. Many bright boys are experiencing a "purpose void," feeling alienated, withdrawn, and addicted to immediate gratification. So, what is The Boy Crisis? A comprehensive blueprint for what parents, teachers, and policymakers can do to help our sons become happier, healthier men, and fathers and leaders worthy of our respect.
Visa hela texten

Dr. Warren Farrell is the author of books published in 17 languages. They include two award-winning international best-sellers: Why Men Are The Way They Are plus The Myth of Male Power. Warren has been chosen by the Financial Times as one of the world's top 100 thought leaders. Dr. Farrell is currently the Chair of the Commission to Create a White House Council on Boys and Men. He is the only man in the U.S. to have been elected three times to the Board of the National Organization for Women (NOW) in New York City. He started more than 300 men and women's groups, including ones joined by men from John Lennon to John Gray. Dr. Farrell has appeared repeatedly on Oprah, TODAY, and Good Morning America, and been the subject of features on 20/20, in Forbes, The Wall Street Journal, People, Parade, and The New York Times. Dr. John Gray is the author of Men are from Mars, Women are from Venus. USA Today listed Mars/Venus as number six among the most influential books of the last quarter century. In hardcover, it was the number one bestselling nonfiction book of the nineties. John Gray's books are translated into approximately 45 languages in more than 100 countries. Dr. Gray's more recent books include Mars and Venus in the Bedroom, Why Mars and Venus Collide, and Work With Me (with Barbara Annis). John has appeared repeatedly on Oprah, as well as on The Dr. Oz Show, TODAY, CBS This Morning, Good Morning America, etc. He has been profiled in Time, Forbes, USA Today, TV Guide, and People. He was also the subject of a three-hour special hosted by Barbara Walters.

Introduction My Personal Journey into The Boy Crisis PART I: Is There Really a Boy Crisis? 1 The Crisis of Our Sons' Mental Health 2 The Crisis of Our Sons' Physical Health 3 The Crisis of Our Sons' Economic Health 4 The Crisis of Our Sons' Education 5 The Crisis of Our Sons Worldwide 6 Why Are We So Blind to the Boy Crisis? PART II: Why the Boy Crisis Isn't Your Fault 7 The Boy Crisis: A Problem Created by a Solution PART III: The Purpose Void 8 The Path-to-Purpose Generation Gap The Power of Purpose "I never thought you cared enough to ask." Your Son's Unconscious Wisdom Can a "Real Man" Transition from Provider-Protector to Nurturer-Connector? 9 The "Hero Paradox": Value Yourself by Not Valuing Yourself A Hero with a Thousand Faces The Sirens of Social Bribes Social bribes: Mom, men, the media, the military The Catch-22 of Your Son-as-Hero 10 Why Do More Marriages Fail in Countries That Succeed? The father's catch-22 The Era of the Multi-Option Mom and the No-Option Dad How Did Our Daughters Avoid the Purpose Void? "Sorry, It's a Boy" 11 How Raising Our Sons Successfully in the Past Differs from Raising Our Sons Successfully for Their Future Making Money Versus Making a Difference How to Guide Different Boys Toward Different Senses of Purpose Our Sons' New Sense of Purpose: The Hero's Journey to Emotional Intelligence Son-Dropping 12 Raising a Balanced Son in an Out-of-Balance World What Happened to Pick-Up Team Sports? Helping Your Son Find His "Edge" Filling Your Son's Purpose Void: Your Son as Hero PART IV: Dad-Deprived Boys vs. Dad-Enriched Boys 13 Dad-Deprived Boys Boys Who Hurt, Hurt Us The Lost Boys: Mass shooters ISIS: A gang of dad-deprived boys? Bio Dad: The Discovery of the Dad Brain Careers Are for Now; Children Are Forever The Absence of Dad Creates the Presence of Government 14 Why Are Dads So Important? Let Me Count the Ways 15 Rediscovering Dad The Generation of the Dad Rich Versus the Dad Poor When Does Dad Begin to Matter? Stepdad or Bio Dad: Does it Make a Difference? 16 What Dads Do Differently Boundary Enforcement (Versus Boundary Setting) Exploring Nature, Taking Risks Roughhousing: Dad as a Rough, Tough Cream Puff "Teachable Moments": A Little Pain for a Lot of Gain Challenging the Kids' Limits Hangout Time Teasing: Emotional Intelligence Training, Dad-Style? The Conditional or Hierarchical Dad The Worrier and the Warrior: The Checks and Balances of Parenting 17 In the Case of Divorce . . . The Four "Must-Dos" 18 The Father Warrior: Why Fathering Will Be a New Male Sense of Purpose com: The Father Warrior Meets the Have-It-All Woman If Men Get Paid More, Is It Realistic for a Dad to Be the Primary Parent? 19 DAD: Discrimination Against Dads "It Doesn't Feel Right When I See Them Together" Moms Have the Right to Children, Dads Have to Fight for Children How Did Father Knows Best Become Father Knows Less? Guiding Your Son to "Make a Difference" 20 The Best Parent is Both Parents, But . . . The Best "Parent" is an Attitude Shift Fighting in front of the kids No one asked why the men were drinking Cheap fun for dad and son Dad-inspiring movies When the Best "Parent" Cannot Be Both Parents The Cub Scouts and character Mentoring and rite-of-passage programs Grandfather time When the biological father is missing, can God the Father help? 21 From "Cultural Shrug" to Cultural Shift Kill Today, Love Tomorrow: The Military Dad Dilemma From Father's Dime to Father's Time The Government: As Problem, as Solution Creating a White House Council on Boys and Men Our Dads, Our Sons, Our Guns 22 Creating Dad-Enriched Families PART V: Heroic Intelligence Versus Health