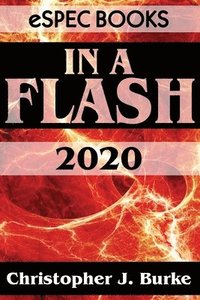 Help yourself to twenty tales of wit and wonder for those with but a little time to read. Pick up Christopher J. Burke's debut collection of award-winning flash fiction for a quick trip through the whimsical to magical to speculative and back again.

And many more fantastic tales to transport you for just a moment or two...there and back again In a Flash!
Visa hela texten

Christopher J. Burke is a writer, high school math teacher, and webcomic creator. He's also a gamer and fan of science fiction who has been telling stories since he was little. This combination ultimately led to his first professional sale, "Don't Kill the Messenger," in Autoduel Quarterly. This was followed by the creation of a fiction fanzine, Driving Tigers Magazine, with stories set in the Car Wars universe of Steve Jackson Games, which had a five-issue run. Thanks to his knowledge and love of that game, he was asked to co-author GURPS Autoduel, 2nd edition for Steve Jackson Games.

He took time off from writing when he switched careers and went back to school to become a teacher. But not before he completed a goal of having a humor piece published in MAD Magazine.

In 2007, he started the math-based webcomic (x, why?), filled with the kind of geeky humor that makes his students groan when he includes them in the daily lesson. The comic still updates with new strips every week on his blog. http://mrburkemath.blogspot.com

After a chance meeting at a launch party in 2014, Christopher was once again bitten by the writing bug and started producing flash fiction. He won several monthly flash fiction contests on the eSpec Books website, and appeared in their anthology, In a Flash 2016.

Christopher lives in Brooklyn with his wife, Antoinette.