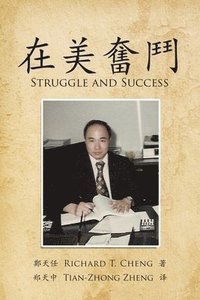 av ???
Häftad Kinesiska, 2019-11-14
109
Köp
Spara som favorit
Skickas inom 10-15 vardagar.
Fri frakt inom Sverige över 159 kr för privatpersoner.
Dr. Richard T. Cheng?s third installment of his biography series, Struggle and Success, describes his dream of carrying a dream, leaving a young wife and a child to go to the US. The family?s stability in the United States makes the author decide to continue to further his study in the United States and take it to the next level to obtain a doctorate.

The author has suffered many twists and turns in his life and survived them all. Learn about the legendary experience he described in his life, including his unremitting efforts and his brilliant achievements in the United States and being a leader in the industry. He became a Chinese culture "Committee of 100" Member and Chinese American Foundation Founder, has done a lot of social charity work, and is very concerned about education and medical career, and fund sponsorship for many universities and scientific research departments. He has become a model of Chinese Americans and is admired by mainstream American society.
Visa hela texten

Richard Cheng was born in Nanjing in June 1934. He graduated from Taiwan Normal University in 1958 with a bachelor's degree in education. He graduated from the University of Wisconsin in 1963 with a master's degree in electrical science. In 1969, he obtained a master's degree in electrical engineering from the University of Illinois, USA. In 1971, he obtained a computer degree from the University of Illinois. A Doctor of Science; Professor of the Rochester Institute of Technology; founder of the Institute of Computer Science from 1973 to 1979; founder and outstanding (star) professor of the Department of Computer Science at the University of Lauderdale from 1979 to 1985; and Chairman and CEO of the Eastern Computer Systems and Engineering Company from 1985 to 2006 . During 1981-1995, he was the Senior Advisor to the National Computer Network of Saudi Arabia and Founder and Senior Advisor of the Computer Science Institute of the University of Saudi Arabia. In 1987, he was the founder and president of the Virginia branch of the Chinese American organization; the member of the American Chinese Elite 100-member Association since 1994; the founder of the Chinese American Foundation in 2012; and a member of the 1991 US Presidential Business Delegation to China.