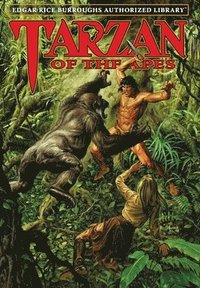 Tarzan of the Apes

av Edgar Rice Burroughs
Inbunden Engelska, 2019-12-12
329
Köp
Spara som favorit
Skickas inom 10-15 vardagar.
Gratis frakt inom Sverige över 159 kr för privatpersoner.
Orphaned as a babe in the African jungle, tiny John Clayton, the only child of the Lord and Lady Greystoke, is rescued by a tribe of great apes. The child, now named "Tarzan," grows to manhood in this savage world, among the fierce anthropoids. Aided by his keen knife and innate intelligence, Tarzan ascends to become king of the apes, able to face any peril and conquer all foes.
When men come to Tarzan's jungle, they bring danger that is motivated by greed and deceit. All of Tarzan's cunning will be required if he is to defeat this threat, and win the love of Jane Porter, the beautiful young woman whose appearance in Tarzan's jungle has left him forever changed.
EDGAR RICE BURROUGHS AUTHORIZED LIBRARY
For the first time ever, the Edgar Rice Burroughs Authorized Library presents the complete literary works of the Master of Adventure in handsome uniform editions. Published by the company founded by Burroughs himself in 1923, each volume of the Authorized Library is packed with extras and rarities not to be found in any other edition. From cover art and frontispieces by legendary artist Joe Jusko to forewords and afterwords by today's authorities and luminaries to a treasure trove of bonus materials mined from the company's extensive archives in Tarzana, California, the Edgar Rice Burroughs Authorized Library will take you on a journey of wonder and imagination you will never forget.
Visa hela texten

"edgar rice burroughs was, and is, the most influential writer, bar none, of our century." —ray bradbury

The creator of the immortal characters Tarzan of the Apes and John Carter of Mars, Edgar Rice Burroughs is one of the world's most popular authors. His timeless tales of heroes and heroines transport readers from the jungles of Africa and the dead sea bottoms of Barsoom to the miles-high forests of Amtor and the savage inner world of Pellucidar, and even to alien civilizations beyond the farthest star. Mr. Burroughs' books are estimated to have sold hundreds of millions of copies, and they have spawned 60 films and 250 television episodes.

vii. The Light of Knowledge 52

ixx. The Call of the Primitive 170

xxi. The Village of Torture 194

xxiv. The Outpost of the World 222

xxv. The Height of Civilization 230

xxvii. The Height of Civilization 252

From the Archives of