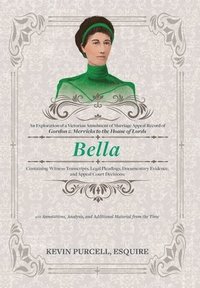 An Exploration of a Victorian Annulment of Marriage Appeal Record to the House of Lords Containing Witness Transcripts, with Annotations, Analysis, and Additional Material from the Time

Bella gives readers an accurate view into an unhappy marriage and the court cases resulting from it.

Bella explores and explains an Appeal Record to the House of Lords, functioning as the highest appeal court in the United Kingdom in 1885. To explain Bella's case to modern readers, the author provides detailed annotations to the text of the Appeal Record, including the many witness transcripts, as well as other documents from the time.

News articles and much legal research help modern readers understand how Bella's fortune was at risk of being squandered by her husband. This effort reveals the legal machinations perpetrated by Bella's husband and his lawyers as well as the excellent brief her own lawyers provide. Four decisions from the House of Lords are also presented with detailed annotations so modern readers may discern the results of both sides' arguments.

Several essays detail the context of the time including the failure of the City of Glasgow Bank, famous in its day for being the first case where bank officers went to jail for concealing very large unpaid loans to insiders and their favorite businesses. The development of judicial objectivity is examined in the context of Bella's case.

The author provides an Epilogue detailing, in some instances, the day to day turmoil of Bella's life.
Visa hela texten

Kevin Purcell became an Anglophile while spending a college semester in England in 1972. After law school and a few years in private practice, Mr. Purcell was, for three decades, a bankruptcy lawyer for the United States Department of Justice. During this time, he wrote and presented many papers to court. As an acknowledgement of his expertise, Mr. Purcell was called as a witness in three criminal trials, resulting in eight convictions.

Having found Bella's Appeal Record in a used bookstore, Mr. Purcell let his fascination with Bella's story guide him in authoring this book. He found her courage striking. Bella seems far more modern than her contemporaries. Her voice has value for our times. She found herself in a situation where, if the other side had prevailed, she'd be left destitute with a child to support, while her ex-husband enjoyed her large inheritance.