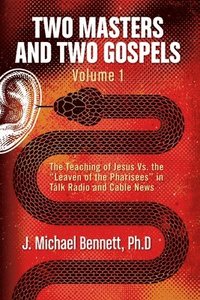 The Teaching of Jesus Vs. The "Leaven of the Pharisees" in Talk Radio and Cable News

av J Michael Bennett
Häftad Engelska, 2020-06-01
209
Köp
Spara som favorit
Skickas inom 10-15 vardagar.
Gratis frakt inom Sverige över 159 kr för privatpersoner.
Finns även som
Visa alla 1 format & utgåvor
Why do many American Christians Today Oppose the Values of Jesus? In recent years, why have most evangelical Christians been more concerned with political ?winning? over soul-winning? Why have they been willing to ?deal with the Devil? to further their interests and agenda, and disregard their call to ?love thy neighbor,? and its impact on their witness to the world and reputation of the Church? Why do their calls to limit government assistance and citizen protections mirror those of the financial, business and wealth classes? Do these modern values reflect the sermons and gospel they hear on Sundays, or the ?sermons? they hear on talk radio and cable news during the week, like the Pharisees whom Christ opposed? How did this ?cognitive dissonance? arise in recent generations of Christians, and by whose hidden hands did they infiltrate the doors of the church?

These questions and others will be addressed in full in this first installment of the Two Masters and Two Gospels series, by a Bible-believing Christian researcher who has uncovered shocking influences and culprits from the darkest corners of both the Mammon-worshipping establishment and Gnostic counter-culture, into the minds of generations of clergy, and through them into the Christian community at large.

It explores the observable changes in the attitudes, perceptions of and interactions with the outside world by America's Religious Right and evangelical base in the recent years of the "Trump phenomena," finding in their new president a messianic figure and an apparent expression of the collective "id" of their embattled culture and heritage of preeminent societal stewardship. However, have they made a "Faustian bargain" with the aim of a reclamation of short-term power and influence, and if so, which party is the compromising Faust, and which is the seducing Devil? Furthermore, have they sacrificed their (sometimes) historical role in society of spiritual guardianship and ethical example and leadership, "despising their birthright" of such like Esau, for a "mess of Trump porridge," or worse yet, in exchange for thirty pieces of silver?

So how have most of today's Religious Right-affiliated "salt of the earth" citizens developed a mindset and attitudes towards others and the issues of the day, expressing clannish pride, xenophobic paranoia of the "stranger" outside their own clan as well as a disregard for their suffering, and an exaltation of the wealthy, worldly successful and arrogant, in direct contradiction to the Sermon-on-the-Mount Kingdom principles of humility and "others-centeredness" taught by their own Founder and Savior? This work asserts that this paradox is best explained upon consideration of the "other gospel" most Christians are exposed to every week, as countless hours of exposure to talk radio and cable news durin...
Visa hela texten

“dr. michael bennett makes some bold and provocative claims in his new book….he documents how the messages of talk radio hosts have infiltrated the church and warns of the dangers of conflating the message of the christ with the propaganda of the media and political systems. bennett tells a disturbing narrative of how the message of jesus was co-opted by those who sought wealth and power…in these polemic times, it is important to know the back story. bennett fills in some of the gaps.” Martin Brooks, Interim President, Peace Catalyst International

“every once in a while you read a book that fundamentally challenges and changes your world view.  Two Masters and Two Gospels is one of that breed. It exposes the cynicism and hypocrisy of the so-called 'religious' right, and proves through meticulous research that for some, God is the ultimate brand, a tool for power and control with a big bank account attached. Those who knowingly and willingly abuse the trust and generosity of others who live their lives as true Christians, with grace, humility and love, deserve to be called out. And Mike Bennett isn't afraid to do it. It's an incredible read.” Ginny Welsch, Executive Director, WRFN-LPFM, Radio Free Nashville

J. Michael Bennett, Ph.D has a doctorate degree in Mechanical Engineering, and served for sixteen years as a team leader in technology development at the U.S. Air Force Research Laboratory, as well as operating his own successful consulting and technology development business as an inventor, having received over twenty four patents on personal inventions now used in the military, commercial and transportation industries, with his work profiled in the Wall Street Journal, Scientific American and television programs on CNN and PBS. For seven years, he produced and hosted a radio program entitled Future Quake (as host "Doctor Future"), broadcast weekly on WRFN FM ("Radio Free Nashville") and then daily on the Christian radio station WENO, AM 760 in Nashville, TN, and worldwide via the Internet (with his shows currently archived at the show website, www.futurequake.com). At any time he is working on a number of new solo book projects. He has also been featured as a radio guest on programs such as Coast to Coast AM with George Noory, and as a keynote speaker on religion and spirituality at the 2008 United Nations and World Council of Churches-sponsored international conference entitled "Reconnecting Heaven and Earth in Spirit, Space and the Human Psyche," hosted by the United Nations NGO (non-governmental organization), The International Institute of Integral Human Sciences (www.iiihs.org). He was a researcher and on-camera host of the documentary, Dark Clouds Over Elberton: The True Story of the Georgia Guidestones. He also irregularly posts his musings on his blog site dedicated to Joshua and Caleb and other "minority views" of God's people, "The Two Spies Report" (www.twospiesreport.wordpress.com), and also hosts a site (www.mikebennettbooks.com) dedicated to news about his published works.

an important preliminary word for the reader

the “leaven of the pharisees” ideology explained, as the ancestor and taproot of modern conservatives and religious right narratives

the gospel of jesus vs. the “gospel” of hannity, fox news, and conservative talk radio and cable news—issue by issue

babylon’s gnostic sorcerers that have influenced our shepherds

the biblical view of capitalism’s nature, powers and its destiny

conclusions, opportunities and warnings for god’s people in the west