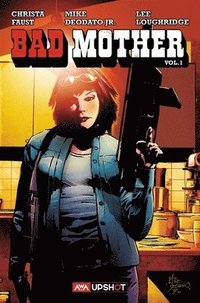 av Christa Faust, Mike Deodato Jr, Lee Loughridge
Häftad Engelska, 2021-03-16
119
Bevaka
Spara som favorit
Tillfälligt slut – klicka "Bevaka" för att få ett mejl så fort boken går att köpa igen.
A nerve-racking thriller from crime writer Christa Faust and blockbuster artist Mike Deodato Jr. (The Resistance, Infinity Wars). April Walters is a hit-and-run victim of life - a middle-aged soccer mom whose inner fire has been snuffed out by her dreary suburban existence. When her teenaged daughter goes missing under mysterious circumstances, April embarks on a harrowing mission to find her; a journey that takes her through the underbelly of her suburban community and sets her on a collision course with a massive crime syndicate and its lethal matriarch. Tested to her limits and beyond, April discovers that hell hath no fury like a mother scorned.
Visa hela texten

"An engaging take on a crime story, AWA's Bad Mother miniseries is a bold combination of the Punisher and a soccer mom." -Screen Rant "Bad Mother couldn't have arrived at a better time, with the resurgence of older women who would be considered past their prime cast in the genre roles we often see both real and fictional men in." -SyFy Wire "Bad Mother #1 is a solid crime thriller set-up, and the pleasure of a crime story is waiting for the chips to fall and to see how far April will go to get her daughter back." -Bleeding Cool