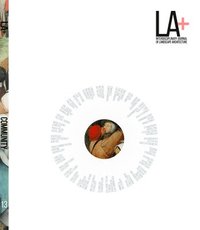 av Tatum Hands, Richard Weller
Häftad Engelska, 2021-06-18
186
Köp
Spara som favorit
LA+ COMMUNITY aims to explore how, over time, each of us moves in and out of multiple communities, shaping them as they shape us, and in turn shaping our landscapes and cities.
Visa hela texten

Tatum Hands is Editor in Chief of LA+ Interdisciplinary Journal of Landscape Architecture produced at the University of Pennsylvania Stuart Weitzman School of Design. From 2003 to 2013, she was director of a project consultancy specialising in parliamentary reporting on legislative, policy, and institutional evaluation and reform. She was co-editor of a national law journal for 13 years and has worked as a freelance publications editor and as a forensic editor for state and federal courts. Dr. Hands has also held positions as executive officer of the Law Reform Commission (WA) and as judicial associate to the chief justice of Australia. She has published widely in the areas of law and political theory.