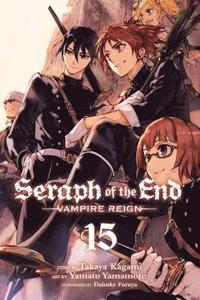 av Takaya Kagami
Häftad Engelska, 2018-09-20
94
Köp
Spara som favorit
Skickas inom 5-8 vardagar.
Fri frakt inom Sverige över 159 kr för privatpersoner.
In a post-apocalyptic world of vampires vs. humans, Yuichiro brings vengeance upon his vampire overlords! After trumpets of the apocalypse proclaim the fall of humanity, vampires arise from the shadows to rule the earth. Yuichiro wants just one thing-to get revenge by killing each and every vampire. With Ferid and Krul undergoing exposure torture, the only one left who can help Yuichiro and his friends is Guren! But Guren has secrets of his own that he's willing to hurt his friends to protect. Meanwhile, Kureto wages war in Shibuya against his father in a coup d'etat. Will he be able to defeat his father and take over the Demon Army, or this move spell his own demise?
Visa hela texten

Takaya Kagami is a prolific light novelist whose works include the action and fantasy series The Legend of the Legendary Heroes, which has been adapted into manga, anime and a video game. His previous series, A Dark Rabbit Has Seven Lives, also spawned a manga and anime series. Yamato Yamamoto, born 1983, is an artist and illustrator whose works include the Kure-nai manga and the light novels Kure-nai, 9S -Nine S- and Denpa Teki na Kanojo. Both Denpa Teki na Kanojo and Kure-nai have been adapted into anime. Daisuke Furuya previously assisted Yamato Yamamoto with storyboards for Kure-nai.