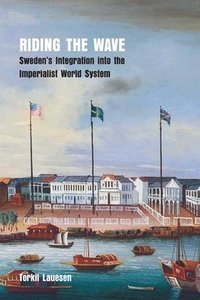 Riding the Wave: Sweden's Integration into the Imperialist World System

av Torkil Lauesen
Häftad Engelska, 2021-06-01
243
Köp
Spara som favorit
"In general, the Scandinavian countries did not have the necessary military power and administrative capacity to establish and operate their own colonies. They had to ride the wave of the great colonial powers in order to enjoy the benefits offered by imperialism. There was no difference, however, between the Scandinavian countries and the great colonial powers regarding their attitude towards colonialism. European colonialism can be seen as a unified whole in which large and small countries played different roles. Some managed territories and opened up markets, others provided capital, built infrastructure, or transported goods to and from the colonies. The Scandinavian countries earned large sums by navigating in the wake of the major colonial powers." -- from Riding the WaveThe Scandinavian countries, particularly Sweden, are capitalist welfare states which provide high standards of living and social security for their nation's citizens. Sweden is regarded as progressive; some even consider it to be half way on the road towards socialism. It is often evoked as a showcase of "capitalism with a human face," when it is not being described as outright "socialist." These are the accomplishments of the Social Democratic Party, supported by the strong trade union movement. However, such claims only make sense if one takes imperialism out of the equation.Torkil Lauesen's Riding the Wave tells another story, about how Sweden rides on the wave of colonialism and imperialism, how it was integrated as a core-state in global capitalism, and how the Swedish "people's home" has been paid for by value transfer from global production chains stretching throughout the Global South. This is also the story of Social Democracy and how the struggle in the Second International between two lines -- one reformist, nationalist, and pro-imperialist, the other internationalist and anti-imperialist -- remains relevant to this day.Lauesen recounts Sweden's failure to establish colonial territories of its own, leading it to find its place as a junior partner first to Germany and then to the United States. Sweden's complicity in settler colonialism and the slave trade is examined, as is its intervention in Finland's Civil War, its profitable trade relations with the Third Reich, support for Belgian colonialism and genocide in the Congo, involvement in exploitative mining operations in Liberia, the rise and decline of the Social Democrats, and much more. An overview is also provided of specific Swedish corporations, from the Kreuger Group to IKEA and H&M, as well as the historically important Swedish arms industry and Swedish imperialism in the Baltic region. All of these are examined within the context of capitalism, colonialism, and imperialism, with particular attention paid to the crisis of neoliberalism and the rise of China. Lauesen insists that in order to understand the history, nature, and prospects of Sweden we must adopt a global perspective.
Visa hela texten