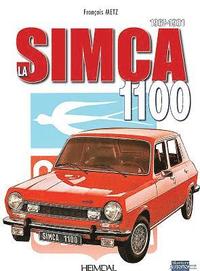 av Metz Francois
Inbunden Franska, 2018-10-31
359
Köp
Spara som favorit
Skickas inom 5-8 vardagar.
Fri frakt inom Sverige för privatpersoner.
The Simca 1100 was brought out a little more than fifty years ago. Although it was less famous than the emblematic Aronde or the endearing 1000, it did represent an important step in the big automobile adventure. It opened the way for more compact, family cars, just as at ease in the towns as they were in the country, en route to holiday resorts just as much to the supermarkets; it was the pioneer of the modern compact car. It became France's most purchased car in 1972 and is still today the last to to have reached this summit not counting the Peugeots or Renaults This book proposes to retrace the story of the Simca 1100 from the drawing board to the end of its career in France, taking a walk in time, illustrated with more than 400 period documents from all Europe and North America, a lot of which are unpublished.
Visa hela texten