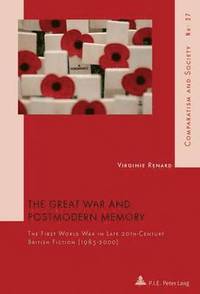 The Great War and Postmodern Memory

av Virginie Renard
Häftad Engelska, 2013-11-06
549
Köp
Spara som favorit
Skickas inom 3-6 vardagar.
Fri frakt inom Sverige för privatpersoner.
The end of the twentieth century was marked in Britain by a renewal of academic and public interest in the Great War, which remains one of the most defining historical events in British national consciousness.&ltBR> Focusing on questions of memory, this book examines some of the First World War narratives that were published during what has been called the late twentieth-century «war books boom». It provides a panoramic overview of these new war stories and offers close readings of texts written not only by best-selling authors such as Pat Barker and Sebastian Faulks, but also by less well-known writers who deserve greater academic attention, such as Robert Edric and Helen Dunmore. &ltBR> It investigates military historians' claims about the lack of historical perspective of recent Great War writers, their perpetuation of «myths» and their inability to move beyond what has already been imagined and said. Positioned at a mid-point between literary analysis and history, this study challenges monolithic views of the war and creates a dialogue rather than a confrontation between the two disciplines. &ltBR> It shows how the selected narratives engage both with the writings of the trench poets and the preoccupations of their postmodern world in order to offer alternative perspectives on the war, exploring in the process complex issues regarding, among other things, the ethics of historical representation, traumatic memory, the politics of memory, and the significance of remembrance for later generations.
Visa hela texten