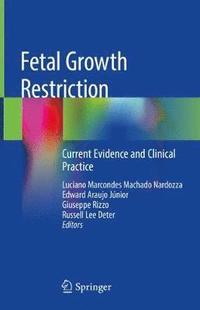 av Luciano Marcondes Machado Nardozza, Edward Araujo Junior, Giuseppe Rizzo, Russell Lee Deter
Inbunden Engelska, 2019-01-04
1339
Köp
Spara som favorit
Skickas inom 3-6 vardagar.
Fri frakt inom Sverige för privatpersoner.
Finns även som
Visa alla 1 format & utgåvor
Fetal growth restriction (FGR) is a condition that affects 5%-10% of all pregnancies and is the second most common cause of perinatal mortality. Fetuses with FGR present with a greater risk of long-term health defects as impaired neurological and cognitive development and cardiovascular or endocrine diseases in adulthood. Due to its high prevalence and serious long term consequences, an in-depth understating of the diagnosis and management of FGR is essential for all those professionals involved in prenatal care, since it can prevent unwanted outcomes both to the mother and to the newborn. On the last years, the knowledge about fetal growth restriction has evolved considerably, with an increasing number of articles being published on this topic and new concepts being described, including new diagnostic guidelines. Even so, there are no recent books fully dedicated to FGR; this theme has only generally been discussed in chapters in larger obstetrics and neonatology books. This current book intends to present and discuss the state of the art on FGR in a clear and didactical way. It will focus on the main topics related to FGR, including its etiology, classification, prediction, diagnosis, and management, as well as on its neurological complications and maternal cardiovascular involvement. Written by experienced and renowned gynecologists from Brazil, Italy and the US, this book will be a comprehensive guide, directed to all gynecologists, radiologists and general practitioners who are involved in prenatal care, as well as to interns, residents, professors and researchers in the field.
Visa hela texten