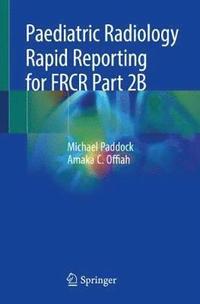 av Michael Paddock, Amaka C Offiah
Häftad Engelska, 2019-02-07
929
Köp
Spara som favorit
Skickas inom 3-6 vardagar.
Gratis frakt inom Sverige över 159 kr för privatpersoner.
Finns även som
Visa alla 1 format & utgåvor
This book provides readers with a comprehensive evaluation of paediatric radiographs in preparation for the demanding Rapid Reporting component of the Fellowship of the Royal College of Radiologists (FRCR) Part 2B examination, where the margin between pass and fail is very narrow. While other resources may include only a handful of paediatric images in a practice reporting packet, this book is dedicated solely to improving paediatric reporting skill and knowledge. It is designed to address an important deficiency identified in the FRCR Part 2B Examiners' Report, in that "many candidates struggle with interpretation of paediatric imaging - even for common paediatric pathologies". The ten practice tests presented, each with 30 images, will assist readers not only in passing the examination but also in the real world when they have to report paediatric radiographs independently. The range of cases covered, from neonate to adolescent, delivers a sound knowledge of both common paediatric fracture patterns and patterns which are subtler but require a definitive answer as to whether they are normal or abnormal. Guidance is also provided on how to describe each abnormality.
Visa hela texten

"This is a unique and invaluable text which will become a renowned staple for FRCR 2B revision." (Andrew Walsh, RAD Magazine, February, 2020)

Dr Michael Paddock is currently a final year specialty registrar on the Sheffield radiology training programme, training in general and paediatric radiology. He completed an ESPRC-funded Biomedical Imaging MSc during his undergraduate medical training at Guy's, King's & St Thomas's School of Medicine at King's College London. After graduating, he undertook foundation training in Dorset followed by clinical paediatric training on the North-West London rotation, including a post at Great Ormond Street Hospital for Children. This led onto an NIHR Academic Clinical Fellowship in clinical radiology at the University of Sheffield which he completed alongside his core clinical radiology training, in addition to completing a Postgraduate Certificate in Clinical Research whilst successfully attaining the FRCR. He led a prospective clinical research study assessing fetal brain development using in utero magnetic resonance imaging, in addition to conducting research in the imaging of suspected physical child abuse. He has numerous first author publications and has won national and international research awards for his work. Dr Amaka C Offiah is a Reader in Paediatric Musculoskeletal Imaging at the Academic Unit of Child Health, The University of Sheffield and an Honorary Consultant Paediatric Radiologist at Sheffield Children's Hospital. After completing radiology training in Sheffield, she moved to London to Great Ormond Street Hospital for Children and the Institute of Child Health, where she obtained her PhD in the imaging of suspected inflicted injury. She returned to Sheffield as a HEFCE-funded Clinical Senior Lecturer in the Academic Unit of Child Health. She was promoted to Reader in January 2015 and is a Fellow of the Higher Education Academy. In addition to over 75 original scientific publications, over 20 peer-reviewed review articles and 10 book chapters, she has co-authored two "Highly Commended" textbooks: "A Radiological Atlas of Child Abuse" and "Fetal and Perinatal Skeletal Dysplasias: An Atlas of Multimodality Imaging". She is Chairperson of the European Society of Paediatric Radiologists' (ESPR) Child Abuse Taskforce, the ESPR Publications Committee, and the Skeletal Dysplasia Group for Teaching and Research. She has been an expert witness in over 150 cases of suspected child abuse and was the first female and first paediatric radiologist to be appointed the Royal College of Radiologists Roentgen Professor.