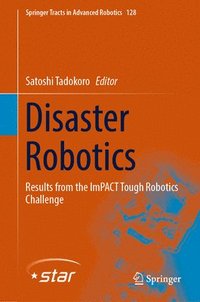 av Satoshi Tadokoro
Inbunden Engelska, 2019-02-13
1599
Köp
Spara som favorit
Skickas inom 3-6 vardagar.
Fri frakt inom Sverige för privatpersoner.
This book introduces readers to the latest findings on disaster robotics. It is based on the ImPACT Tough Robotics Challenge, a national project spearheaded by the Japan Cabinet Office that focuses on developing robotics technologies to aid in disaster response, recovery and preparedness. It presents six subprojects that involve robot platforms and several component technologies used in conjunction with robots: cyber rescue canines, which are digitally empowered rescue dogs; serpent-like robots for searching debris; serpent-like robots for plant/infrastructure inspection; UAVs for gathering information on large areas struck by disaster; legged robots for plant/infrastructure inspection in risky places; and construction robots for recovery tasks that require both power and precision. The book offers a valuable source of information for researchers, engineers and practitioners in safety, security and rescue robotics, disaster robotics, and plant and infrastructure maintenance. It will also appeal to a wider demographic, including students and academics, as it highlights application scenarios and the total concept for each robot in various scientific and technical contexts. In addition to a wealth of figures and photos that explain these robots and systems, as well as experimental data, the book includes a comprehensive list of published papers from this project for readers to refer to. Lastly, an external website offers video footage and updated information from the International Rescue System Institute.
Visa hela texten

Satoshi Tadokoro graduated from the University of Tokyo in 1984. He served as an Associate Professor at Kobe University from 1993 to 2005, and has been a Professor at Tohoku University since 2005. He has been president of the International Rescue System Institute since 2002 and was the IEEE RAS President from 2016 to 2017. He served as project manager for the MEXT DDT Project on rescue robotics, which involved more than 100 professors nationwide, from 2002 to 2007, and served as a PI of numerous NEDO projects related to disaster robotics. His team has developed various rescue robots, two of which, Quince and Active Scope Camera, are well-known because they were used in the nuclear reactor buildings following the Fukushima-Daiichi Nuclear Power Plant Accident. The project manager for Japan Cabinet Office's ImPACT Project (2014 to 2018), he is an IEEE Fellow, RSJ Fellow, JSME Fellow, and SICE Fellow.