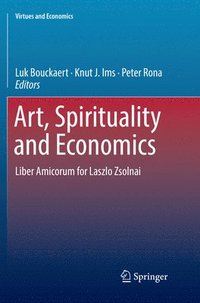 av Luk Bouckaert, Knut J Ims, Peter Rona
Häftad Engelska, 2019-01-12
1229
Köp
Spara som favorit
Skickas inom 7-10 vardagar.
Gratis frakt inom Sverige över 159 kr för privatpersoner.
Finns även som
Visa alla 2 format & utgåvor
This volume celebrates the work of Laszlo Zsolnai, a leading researcher and scholar in the field of the ethical and spiritual aspects of economic life, who has made significant contributions to the connection between ethics, spirituality, aesthetics and economic theory. The book offers a selection of essays concerned with the ethical, spiritual and aesthetic context within which economics as a social studies discipline should be situated in order to avoid the sort of dehumanising consequences that theories based on utility maximisation and rational choice necessarily entail. It presents the economic activities of human beings not as some sort of preordained obedience to universal laws that operate independently of other human concerns, but, rather, as a part of the human desire for the Aristotelian good life. It looks at the various considerations -moral, spiritual and aesthetic - that take part in the formation of economic decisions in sharp contrast with theories that purport to explain economic phenomena solely on the basis of utility maximisation.
Visa hela texten

Luk Bouckaert ( Degrees1941) is emeritus professor of ethics at the Catholic University of Leuven (Belgium). He is a philosopher and an economist by training. His research and publications fall within the fields of business ethics and spirituality. In 1987 he founded with some colleagues the interdisciplinary Centre for Economics and Ethics at the University of Leuven. In 2000 he started the SPES Forum (Spirituality in Economics and Society) and in 2004 the international European SPES Forum which he chaired as president until 2014. He wrote several books in Dutch. Recent publications in English include: Spirituality as a public good (co-edited with L. Zsolnai, 2007), Frugality. Rebalancing material and spiritual values in economic life (co-edited with H.Opdebeeck and L.Zsolnai, 2008), Imagine Europe (co-edited with J.Eynikel, 2009), Respect and Economic Democracy (co-edited with Pasquale Arena, 2010), The Palgrave Handbook of Spirituality and Business (co-edited with L.Zsolnai, 2011), Business, Ethics and Peace, (co-edited with M.Chatterji, 2015). Knut J. Ims is Professor in business ethics at the Department of Strategy and Management, the Norwegian School of Economics (NHH) in Bergen, from which he has a bachelor degree (1976) and a HAE (1979) degree. He obtained his PhD from the School of Economics and Legal Science, Gothenburg University, Sweden in 1987. He is active member of the business ethics faculty group of (CEMS) - Global Alliance for Management Education and had been teaching at a number of European Universities. He is Fellow of the European SPES Institute. He has been visiting scholar at The Corvinus University of Budapest, Hungary, Universidad Catholica Argentina (UCA) in Buenos Aires, Argentina, Weatherhead School of Management, Cleveland, US, University of Illinois at Urbana Champagne, US, and University of Oslo, Norway. He has been the lead From 1985 -1995 (Information and Management) and a number of courses at MBA level including CEMS blocked seminars from 2001; Business Ethics, Nice, France 2001, Ecology and the Limits of Business, NHH, Bergen, 2002, Sustainability, Bocconi, 2005, The Future International Manager, Corvinus University, Hungary, 2008 just to mention a few. He has also been local host of several CEMS Blocked seminars. At bachelor level he has been teaching a number of courses, including compulsory courses at NHH, Bergen with more than 300 students. From 1985 he has every year presented his research at scientific conferences (From Hawaii, US, to Pharo in Bhutan etc.). The next presentation of his research will be in Tel Aviv, Israel in September. Peter Rona is Fellow of Blackfriars Hall, University of Oxford, where he teaches courses in economics and the philosophical foundations of the social sciences. He obtained his B.A. degree in economic history (cum laude) from the University of Pennsylvania and his law degree from Oxford University (First Class) in 1964. He was an associate of the Washington, D.C, law firm, Arnold & Porter and counsel to the US Department of Commerce before becoming the personal assistant of Lord Richardson, Governor of the Bank of England. He joined the Schroder Group in 1969 as the General Counsel of its operations in the United Sates, and became the President and Chief Executive of the IBJ Schroder Bank & Trust co. in 1985. In 2003 he joined the faculty of Eoetvoes Lorand University where he taught public international law and in 2006 he was made an Honorary Professor there. His published articles include a study of the Euro and an examination of the philosophical foundations of economics.

About the authors.- Part I: Introduction.- 1 Laszlo Zsolnai, as friend and moral scientist; Luk Bouckaert, Knut Ims and Peter Rona.- 2 Laszlo Zsolnai 's academic career: an overview; Luk Bouckaert, Knut Ims and Peter Rona.- Part II: The power of art.- 3 The Essential, the Beautiful and the Economic: the Brotzeit by Eduard Grutzner and Zsolnai's Philosophy; Carlos Hoevel.- 4 The Last Supper by Leonardo da Vinci and the links to food, conviviality, sharing, and spirituality; Antonio Tencati.- 5 A dog. Just a dog; Josep M. Lozano.- 6 The Light of the World; Katalin Illes.- 7 Friedensreich Hundertwasser - The Five Skins of the Ecological Man; Ove Jakobsen and Vivi ML Storsletten.- 8 Antarctica - Natures's Awesome Artwork; Eleanor O'Higgins.- 9 Az OEreg Halasz (The Old Fisherman): An essay for Zsolnai Laszlo; Mike Thompson.- Part III: Beyond rational ethics.- 10 From ethics to spirituality: Laszlo Zsolnai on human motivations; Zsolt BODA.- 11 Angels from the Future. The voice of coming generations; Luk Bouckaert & Rita Ghesquiere.- 12 The Aesthetics of Energy Resilience; Paul Shrivastava.- 13 On the experience of beauty in nature, in mathematics and science, and in spirituality; Peter Pruzan.- 14 Management and liberal arts: A Transformational Odyssey with Rabindranath Tagore; Sanjoy Mukherje.- Part IV: Economics and the creation of meaning.- 15 The capitalistic religion: Old questions, new insights; Luigino Bruni.- 16 Nature, Economics, and Scream; Knut J. Ims.- 17 The Idea of Corporate Social Responsibility and the Responses of Economic Theory; Stefano Zamagni.- 18 What can sense making economies learn from the GNH of Bhutan?; Hendrik Opdebeeck.- 19 Innovation in the intervention into nature by legal means; Daniel Deak.