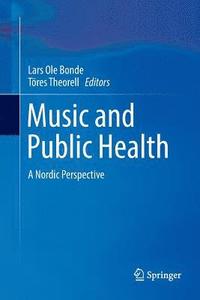 av Lars Ole Bonde, Toeres Theorell
Häftad Engelska, 2018-12-26
1599
Köp
Spara som favorit
Finns även som
Visa alla 2 format & utgåvor
From the Nordic countries (Denmark, Norway, Sweden and Finland) comes an exciting source of theoretical approaches, epidemiological findings, and real-life examples regarding the therapeutic and health-enhancing effects of music. Experts across fields including psychology, neurology, music therapy, medicine, and public health review research on the benefits of music in relieving physiological, psychological, and socioemotional dysfunction. Chapters link musical experiences (listening and performing, as well as involvement in movement, dance, and theatre) to a wide range of clinical and non-clinical objectives such as preventing isolation, regulating mood, reducing stress and its symptoms, and treating dementia. And the book's section on innovative music-based interventions illustrates opportunities for incorporating musical activities into public health programs. Among the topics covered are: * Associations between the use of music, cultural participation and health-related outcomes in adult Scandinavian populations * Music practice and emotion handling * How music translates itself biologically in the body * Music as a forum for social-emotional health * Participation and partnership as core concepts in music and public health * Music therapy as health promotion for mothers and children at a public health clinic Music and Public Health will gain interested readers among researchers, teachers, students, and clinicians in the fields of music education and therapy, as well as researchers and students of public health who are interested in the influence of culture and the arts. The book also will be relevant to administrators in public health services.
Visa hela texten

Lars Ole Bonde, PhD, is professor of Music Therapy at Aalborg University in Denmark. He also is professor of Music and Health at the Center for Research in Music and Health at the Norwegian Academy of Music in Oslo, Norway. Toeres Theorell, MD, PhD, is a physician with specialty in internal medicine, cardiology, and social medicine. Dr. Theorell was professor of Psychosocial Medicine at the Karolinska Institute in Sweden from 1995 to 2006. After retirement, he has been working as scientific consultant at the Stress Research Institute at the University of Stockholm in Sweden. He also is an amateur musician.

PART ONE: EPIDEMIOLOGICAL RESEARCH IN MUSIC AND PUBLIC HEALTH IN THE NORDIC COUNTRIES Ola Ekholm & Lars Ole Bonde (DK): A Danish Music and Public Health Study: Some conclusions and consequences for preventive projects Abstract: A summary of the first Danish study on music and Public Health with 14.000 respondents will include selected results from the study and a discussion of how this new knowledge may inform future preventive projects. Toeres Theorell (maybe with coauthors) (S): Musicality and creativity: The role of musical abilities as predictors. Abstract: There is a well-established statistical relationship between musical ability (rhythm, pitch, and melody) and general intelligence. In our group we have also examined the relationship between amount (total hours) of life-long musical practice on one hand and poor capacity to handle emotions (alexithymia) on the other hand. Our studies have been based upon 27-54-year-old twins in the Swedish Twin Registry. We have shown that both in men and women there is a significant negative relationship between numbers of music practice hours and poor ability to handle emotions - alexithymia. In other words, music practice statistically protects individuals in the population from alexithymia. As a measure of alexithymia, we have used the total score (TAS 20) of three aspects of alexithymia, namely ability to differentiate emotions, ability to put words on emotions, and ability to externalize feelings. However, according to twin modeling analyses, the relationship between amount of music practice and alexithymia is determined mainly by genetic factors influencing both alexithymia and amount of practice (via motivational processes). Our results similarly show that a high level of musical achievement (ranging from inactivity in music to being an amateur and to being an advanced professional) is associated with good emotional ability and that high writing achievement also independently contributes to good emotional ability. Independently of writing and musical ability, for men high achievement in visual arts and for women high achievement in theatre performing contribute to good emotional ability. We have recently extended these studies to the examination of the association between musicality (objective tests of rhythm, melody, and pitch ability) and likelihood of working in a creative occupation. It is hypothesized that musicality is an important aspect of creative thinking and that both emotional capacity (the opposite of alexithymia) and general intelligence contribute to this likelihood. Using a job exposure matrix (O*Net), we find - as expected - that high age, high educational level, and high general intelligence level all contribute to the likelihood of working in a creative occupation. However, adding to these expected findings, we also find for men that a high score for musical pitch contributes to likelihood of working in a creative occupation. For women, a low score for alexithymia contributes to this likelihood as well. These associations were not affected when all musician participants were excluded from the analyses. In other words, there is, for instance, an independent relationship in men between a high score for pitch and likelihood of working in a creative occupation regardless of musician identity. Our research results point at a complex web of musical (and, in general, artistic) experiences as well as emotional skills as being of importance for recruiting and maintaining workers in creative occupations. The findings are partly gender specific. In the chapter, we are going to discuss possible causal and non-causal pathways explaining these associations as well as possible societal implications. Fredrik Ullen (with members of his team) (S): Topic to be decided(Abstract to follow) Steinar Krokstad (with co-author(s) to be identified) (N): HUNT data on music and health revisited (Abstract to follow) PART TWO: THEORY Suvi Saarikallio & Margarida B