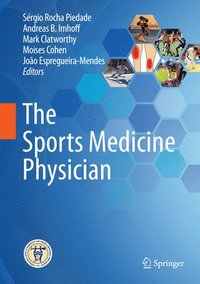 av Sergio Rocha Piedade, Andreas B Imhoff, Mark Clatworthy, Moises Cohen, Joao Espregueira-Mendes
Inbunden Engelska, 2019-04-30
2103
Köp
Spara som favorit
Finns även som
Visa alla 1 format & utgåvor
This superbly illustrated book provides information of outstanding quality on the presentation and management of the entire range of sports injuries and conditions likely to be encountered by the sports medicine physician, as well as many other topics relating to sports activity, events, and outcomes. It is the product of close collaboration among members of several ISAKOS committees, and the chapter authors are clinicians and scientists from across the world who are acknowledged experts in sports medicine and orthopedics. The book opens by discussing fundamental topics and principles, covering subjects such as the biomechanics of injuries, physiological demands in sports practice, sports activity at different ages, nutrition and hydration, strength and conditioning, injury prevention, recovery, rehabilitation, and return to play. Subsequent chapters focus in depth on overtraining injuries, neurological disorders, sports trauma to different parts of the body, and special clinical conditions. Further topics to be addressed are different scenarios in sports (e.g., indoor vs outdoor), sports equipment, biologic treatment of sports injuries, major sporting events, and patient-recorded outcome measures.
Visa hela texten

"This would be extremely useful for those in medical training, particularly residents and fellows. It is also a worthy reference for physicians in practice. ... Overall, I found this book to be informative, well written, and useful. It is very strong in its coverage of musculoskeletal medicine. ... It is well referenced and would make a fine book for trainees to read to obtain baseline knowledge in the field of sports medicine." (Craig Young, Doody's Book Reviews, August, 2019)

Sergio Rocha Piedade is former Head of the Department of Orthopedics and Traumatology and Coordinator of Exercise and Sports Medicine at the Faculty of Medical Sciences of the State University of Campinas (FCM/UNICAMP), Sao Paulo, Brazil. Dr. Piedade has much experience in the field of exercise and sports medicine and orthopedic surgery. He holds a Specialist Degree in Orthopedics and Traumatology from the Brazilian Society of Orthopedics and Traumatology, and a Master's Degree in Surgery and Sports Medicine and a PhD in Surgery from UNICAMP. Professor Piedade is current Chairman of the ISAKOS Sports Medicine Committee. He acts as a reviewer for the International Journal of Artificial Organs,and is the author of more than 20 articles in peer-reviewed journals as well as many book chapters. Andreas B. Imhoff, MD, is Professor of Orthopaedic Surgery and Chairman/Director of the Department of Orthopaedic Sports Medicine at the Technical University Munich (TUM), Hospital Rechts der Isar, Munich, Germany. He is a past President and General Secretary of the German Society of Arthroscopy and Joint Surgery (AGA) and will be the AGA Congress Chairman in the year 2016-7. He has also served on the executive boards of the German Society of Orthopaedics and Orthopaedic Surgery (for almost 20 years) and the German Society of Orthopaedics and Traumatology since 2009. Professor Imhoff is current Chairman of the ISAKOS Shoulder Committee. He has been the recipient of a number of awards and Honorary Membership (AANA, AGA, BuenosAires, Chile, India, Malaysia) and regularly appears in the Focus Toplist of Shoulder and Knee Surgeons, receiving maximum points. He is a member of the editorial boards of several leading journals and Editor-in-Chief of Arthroskopie and the Open Access Journal of Sports Medicine. He is the author of more than 300 papers cited in PubMed and author or editor of 32 books. Moises Cohen is a Professor at the Federal University of Sao Paulo (UNIFESP), Brazil. His work focuses on orthopedics and traumatology, knee surgery, and arthroscopy and sports traumatology. Dr. Cohen graduated in Medicine at the Center of Medical and Biological Sciences, College of Medicine of Sorocaba, PUC-SP in 1977 and then specialized in Orthopedics and Traumatology. He completed his Master's degree in Orthopedics and Traumatology at the Escola Paulista de Medicina and gained his doctorate in 1994. In 2010 Dr. Cohen was elected Head of the Department of Orthopedics and Traumatology of the Escola Paulista de Medicina, UNIFESP. He served as President of ISAKOS from 2011 to 2013 and is an editorial board member of Cartilage and Revista Brasileira de Ortopedia. Mark Clatworthy is an Orthopedic knee surgeon who practices in Auckland, New Zealand, for the last 19 years. Dr. Clatworthy trained initially in New Zealand then worked under leading knee surgeons in the United States, Canada, the United Kingdom, and Australia. He has been actively involved in clinical research and has published many research articles, reviews, and book chapters. He has participated in pioneering patient specific computer-guided knee surgery and in developing arthroscopic and osteotomy techniques, which he teaches globally. He is a member of four societies comprising the world's leading knee surgeons. He is the Past President of the ACL Study Group, current chairman of the ISAKOS Knee Sports and Preservation Committee, past chairman of the ISAKOS Arthroscopy Committee and is a member of the Herodicus Society Joao Espregueira-Mendes, MD, PhD, has been Professor of Orthopaedic Traumatology and Chairman of the Orthopaedic Department at Minho University, Portugal, since 2005. In addition, he is Director of Clinica do Dragao - Espregueira-Mendes Sports Centre, FIFA Medical Centre of Excellence, FC Porto Dragao Stadium, Porto, Portugal. He also holds the position of Orthopaedic Surgeon of FC Porto and Senior Researcher in Biomaterials, Biodegradables, and Biomimetics i