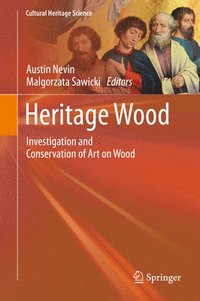 Investigation and Conservation of Art on Wood

av Austin Nevin, Malgorzata Sawicki
Inbunden Engelska, 2019-10-28
1099
Köp
Spara som favorit
Skickas inom 7-10 vardagar.
Fri frakt inom Sverige för privatpersoner.
Finns även som
Visa alla 1 format & utgåvor
This volume highlights recent research efforts in the conservation and investigation of works of art on wood. Through eleven case studies it showcases different experimental methods ranging from X-ray analysis of objects to the study of cross-sections made from micro-samples. New research focusing on the technical study, treatment and assessment of works of art on wood in its many forms is featured in this edited volume. Technical studies include the attribution and investigations of a triptych by Hans Memling and a sculpture from workshop of Michel and Gregor Erhart, decorated Syrian rooms, and investigations of finely carved Gothic wooden objects. Synchrotron-based methods are presented for studying the alteration of 19th c. verdigris in Norway, and multi-analytical methods are employed for the investigations of 16th to 19th c. East Asian lacquer from the Kunsthistorisches Museum in Vienna. Novel methods for the cleaning of gilded surfaces using gels and emulsions are shown, as are innovative strategies for the consolidation for waterlogged wood, providing key data for the assessment of risks and benefits of new methods, and the short and long-term effects on gilding layers and archaeological wood. The book clearly shows how collaboration between engineers, physicists, biologists and chemists and conservators of different types of materials can lead to new research in conservation science. This book is crucial reading for conservators and conservation scientists, as well as for technical art historians, providing key methodological case studies of polychromy from different temporal and geographical contexts.
Visa hela texten

Austin Nevin, chemist and conservator, is a Researcher at the CNR-IFN where he has worked since 2011, and he is the coordinator of the CNR-IFN research group. His research focuses on the analysis of paintings and painting materials, and the study of ancient and modern cultural heritage using optical and spectroscopic techniques. He is the co-author of over 40 publications, one of the editors of the Springer series Cultural Heritage Science and a member of the permanent scientific committee of the LACONA and of the TECHNART conferences. He has served as the coordintor of the Scientific Research Working Group of ICOM-CC (from 2011-2014) and is a Council Member and Fellow of the IIC (since 2013). Following a degree in Chemistry (Mchem) from the University of Oxford (2001) and a 3-year MA in the Consrvation of Paintings (Wall Paintings) from the Courtauld Institute of Art (2004), Nevin went on to obtain a PhD from the Courtauld entitled "Fluorescence and Raman Spectroscopy for the analysis of proteinb-based binding media" (2008). Between 2004-2007 he won a Marie Curie Early Stage Training Fellowship at IESL-FORTH (Greece) where his research focussed on the analysis of paintings using laser-based techniques.

An Investigation of the Feasibility of the Use of Gels and Emulsions in Cleaning of Wooden Gilded Surfaces. Part A: Removal of Brass-Based Overpainting; M. Sawicki et al.- An Investigation of the Feasibility of the Use of Gels and Emulsions in Cleaning of Gilded Wooden Surfaces. Part B: Cleaning of Soiled Oil-Gilding; M. Sawicki et al.- New Consolidants for the Conservation of Archeological Wood; Z. Walsh-Korb et al.- Analytical examination and conservation of East Asian lacquer works from European collections; V. Pitthard et al.- Technology for technology's sake: The technical study of Gothic miniature boxwood carvings in the Thomson Collection at the Art Gallery of Ontario; L. Ellis.- The use of a copper green oil paint in the interiors of Eidsvoll Manor in Norway: Analysis of a discoloured architectural paint from 1814; E. Verweij et al.- A Polychrome Wooden Interior from Damascus: A Multi-Method Approach for the Identification of Manufacturing Techniques, Materials and Art Historical Background; P. Kovacs-Mravik et al.- An original approach to the active climate control based on Equilibrium Moisture Content (EMC) as setpoint in a middle-age buidling in Palermo, Italy; P. Dionisi-Vinci, D. Romano.- The influence of low temperature on moisture transport and deformation in wood: A neglected area of research; C. Bylund Melin.- Conservation and technological research of a polychrome sculpture of Christ on a donkey from the workshop of Michel and Gregor Erhart; K. Meczynska, A. Michnikowska.- Mufti-disciplinary complex research to reconsider basic questions on attribution and dating of the Last Judgment triptych from National Museum in Gdansk by Rogier van der Weyden and Hans Memling; I. Szmelter,T. Wazny.