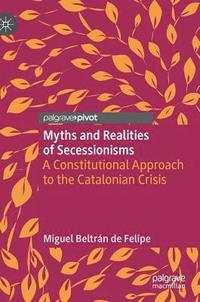 Myths and Realities of Secessionisms

A Constitutional Approach to the Catalonian Crisis

av Miguel Beltran De Felipe
Inbunden Engelska, 2019-02-05
619
Köp
Spara som favorit
Skickas inom 3-6 vardagar.
Fri frakt inom Sverige för privatpersoner.
This book provides a comprehensive overview of the Catalonian crisis in Spain from a historical, political and legal perspective. Using the precedents of Quebec, Scotland, and partially Veneto and Bavaria, the author highlights some of the key issues of contemporary secessionist nationalism, including its relationship with sovereignty, the right to have a referendum, and the capacity of a particular territory to amend the constitution in order to admit secession.
Visa hela texten

Miguel Beltran de Felipe is Professor of Law at the University of Castilla-La Mancha, Spain. He previously served as a law clerk in the Constitutional Court of Spain, as APSA-Fulbright Congressional Fellow in the House of Representatives of the US, and as a legal counsel for the Secretary of State for Parliamentary Affairs of Spain.

CHAPTER 1. HISTORICAL AND CONSTITUTIONAL BACKGROUND: AN ACCOUNT OF THE CATALAN SECESSIONIST PROCESS1. Brief historical overview 2. Constitutional background: Spain as a quasi-federal polity3. The origins of the conflict: the "Estatuto" (2006) and the judgment of the Constitutional Court (2010)4. The uncertain path to independence and the explosion of the crisis (2012-2014): vindicating the "right to decide"5. The "plebiscitarian" regional elections of September 2015: victories and defeats6. Insurrection and reaction (2016-2018): the referendum, the declaration of independence and the emergency intervention of the national government7. Why?References CHAPTER 2. CONSTITUTIONAL AND COMPARATIVE ANALYSIS OF THE CATALAN SECESSIONIST PROCESS1. Secession under international law: self-determination and the so called "remedial secession" 2. A first comparative approach: the main foreign precedents of a referendum on independence2.1. Canada, Quebec and the Clarity Act 20002.2. The UK, Scotland and the 2014 referendum2.3. Can Quebec and Scotland be considered valid precedents for Catalan authorities' attempt to hold a referendum on independence?3. A second comparative approach: two recent attempts of referenda on independence in Europe blocked by constitutional courts3.1 Germany and Bavaria3.2 Italy and Veneto3.3 Are Veneto and Bavaria comparable to Catalonia?4. The constitutional situation in Spain (according to the Constitutional Court)5. The European question CHAPTER 3. PARADOXES, MISTAKES, AND POSSIBLE STEPS TOWARDS AN APPEASED SOLUTION 1. Some paradoxes 2. Playing with law and politics3. Relevant mistakes committed by both sides4. Secession and democracy5. Is there a way out?5.1 The need for dialogue and mutual recognition5.2 The viability of constitutional reform(s) and the possible acknowledgement of the plurinationality of Spain5.3 Is there really no space for some kind of agreed referendum?6. Final reflections