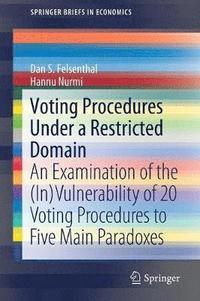 Voting Procedures Under a Restricted Domain

av Dan S Felsenthal, Hannu Nurmi
Häftad Engelska, 2019-04-11
619
Köp
Spara som favorit
Skickas inom 10-15 vardagar.
Fri frakt inom Sverige för privatpersoner.
Finns även som
Visa alla 1 format & utgåvor
This book deals with 20 voting procedures used or proposed for use in elections resulting in the choice of a single winner. These procedures are evaluated in terms of their ability to avoid five important paradoxes in a restricted domain, viz., when a Condorcet winner exists and is elected in the initial profile. Together with the two companion volumes by the same authors, published by Springer in 2017 and 2018, this book aims at giving a comprehensive overview of the most important advantages and disadvantages of voting procedures thereby assisting decision makers in the choice of a voting procedure that would best suit their purposes.
Visa hela texten

Dan Felsenthal is emeritus professor of political science at the University of Haifa. Currently he is also Research Associate at the Centre for the Philosophy of Natural and Social Science, London School of Economics and Political Science. His main research areas are measurement of voting power, voting theory and voting behavior, social choice theory, and various applications of game theory to politics. He has published many papers on these subjects as well as two books: Topics in Social Choice: Sophisticated Voting, Efficacy, and Proportional Representation (New York: Praeger, 1990), and (jointly with Moshe Machover) The Measurement of Voting Power: Theory and Practice, Problems and Paradoxes (Cheltenham, UK: Edward Elgar Publishing Ltd., 1998). In addition, he edited (jointly with Moshe Machover) the book Electoral Systems: Paradoxes, Assumptions, and Procedures (Berlin Heidelberg: Springer, 2012). Hannu Nurmi was the Associate Professor of Methodology of Social Sciences in University of Turku 1974 - 1995. Thereafter he became the chair holder of Political Science in the same university until his retirement in 2012.During the academic year 1972-73 he was a Fulbright-Hayes Scholar at the Johns Hopkins University. In 1978 Nurmi held a British Academy Wolfson Fellowship at University of Essex and from 1991 till 1996 he was the Dean of the Faculty of Social Sciences in University of Turku. In 1998 he was a Visiting Professor at University of Minnesota. Nurmi was nominated the Academy Professor of Academy of Finland for the period 2003-2008. He is a member of Academia Scientiarum Fennica (the Finnish Academy of Sciences and Letters) from 1982. From 2008 till 2011 he was the Director of Centre of Excellence in Public Choice Research of University of Turku. From 2012 he is Professor Emeritus in the same university. Nurmi's research interests include the theory of voting and electoral systems, applied game theory and causal modeling.