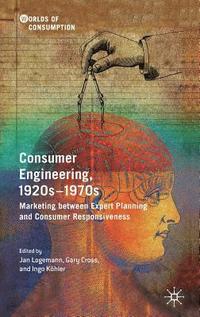 av Jan Logemann, Gary Cross, Ingo Koehler
Inbunden Engelska, 2019-06-14
1299
Köp
Spara som favorit
Finns även som
Visa alla 2 format & utgåvor
In the middle of the twentieth century, a new class of marketing expert emerged beyond the familiar ad men of Madison Avenue. Working as commercial designers, consumer psychologists, sales managers, and market researchers, these professionals were self-defined "consumer engineers," and their rise heralded a new era of marketing. To what extent did these efforts to engineer consumers shape consumption practices? And to what extent was the phenomenon itself a product of broader social and cultural forces? This collection considers consumer engineering in the context of the longer history of transatlantic marketing. Contributors offer case studies on the roles of individual consumer engineers on both sides of the Atlantic, the impact of such marketing practices on European economies during World War II and after, and the conflicted relationship between consumer activists and the ideas of consumer engineering. By connecting consumer engineering to a web of social processes in the twentieth century, this volume contributes to a reassessment of consumer history more broadly.
Visa hela texten