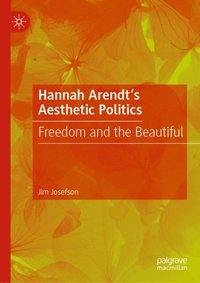 Freedom and the Beautiful

av Jim Josefson
E-bok (EPUB - DRM), Engelska, 2019-05-27
809
Ladda ned
Spara som favorit
Laddas ned direkt
Läs i vår app för iPhone, iPad och Android
Finns även som
Visa alla 1 format & utgåvor
We face a crisis of public reason. Our quest for a politics that is free, moral and rational has, somehow, made it hard for us to move, to change our positions, to visit places and perspectives that are not our own, and to embrace reality. This book addresses this crisis with a model of public reason based in a new aesthetic reading of Hannah Arendt's political theory. It begins by telling the story of Arendt's engagement with the Augenblicke of Nietzsche, Kierkegaard, Jaspers, Heidegger, Kafka and Benjamin, in order to identify her own aesthetic Moment. Josefson then explicates this Moment, what he calls the freedom of the beautiful, as a third face of freedom on par with Arendt's familiar freedoms of action and the life of the mind. He shows how this freedom, rooted in Jaspers's phenomenology and a non-metaphysical reading of Kant, serves to redress the world-alienation that was a uniting theme across Arendt's works. Ultimately, this volume aims to challenge orthodox accounts of Arendtian politics, presenting Arendt's aesthetic politics as a radically new model of republicanism and as an alternative to political liberal, deliberative and agonistic models of public reason.
Visa hela texten