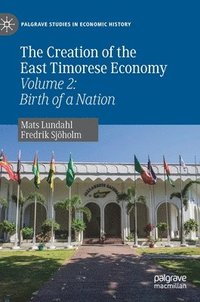 The Creation of the East Timorese Economy

Volume 2: Birth of a Nation

av Mats Lundahl, Fredrik Sjoeholm
Inbunden Engelska, 2020-01-30
1019
Köp
Spara som favorit
Skickas inom 5-8 vardagar.
Fri frakt inom Sverige för privatpersoner.
Finns även som
Visa alla 2 format & utgåvor
Very little has been written on the economy of East Timor since the country's independence in 2002, and no comprehensive account exists of the economic history of the country. The former cannot be properly understood without a knowledge of the historical process that created the present-day situation. This research monograph is the first book to combine a historical analysis of the creation and development of the economy of East Timor from the earliest times to the present, and an analysis of the main contemporary problems facing the East Timorese economy. Volume II offers a detailed analysis of the economy of East Timor, of politics, fiscal policy and social progress. It pays particular attention to structural problems: employment generation and the lack of a modern sector, the modernization of agriculture and the management of the oil deposits in the Timor Sea. The first volume, available separately, considers East Timor from a chronological perspective, as a Portuguese colony, and a country occupied by Indonesia up to national independence in 2002. This book will appeal to economists, political scientists and social scientists in general as well as practitioners, since it focuses on down-to-earth problems that need to be solved for the economy to develop. The book can also be read by students both at the undergraduate and graduate levels and could be used for case studies in development.
Visa hela texten

Mats Lundahl is Professor emeritus of Development Economics at the Stockholm School of Economics, where he held his chair between 1987 and 2013. He has published widely in professional journals, including the American Economic Review, Journal of Development Economics, Journal of Latin American Studies, Human Organization and Comparative Economic Studies. He is also the author or editor of sixty-six books. The most recent one published by Palgrave Macmillan is The Economics of the Frontier: Conquest and Settlement (with Ronald Findlay, 2017). Fredrik Sjoeholm is Professor of International Economics at Lund University and affiliated researcher at the Research Institute of Industrial Economics. Sjoeholm has published a large number of articles on globalization in international journals including the American Economic Review Papers and Proceedings, Journal of International Economics, Journal of Development Economics, Economic Geography and European Economic Review. He has also edited two books on Southeast Asia, including Multinational Corporations in Indonesia and Thailand: Wages, Productivity and Exports (Palgrave Macmillan, 2006).

1. A Poor Young Nation 2. From Independence to Turmoil 3. Political, Economic and Social Developments 2007-2018 4. Population Growth and Job Creation: The Search for a Modern Sector 5. The Agricultural Sector 6. Oil and the Resource Curse 7. Conclusions and a Look to the Future