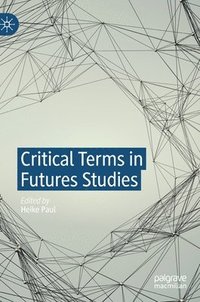 av Heike Paul
Inbunden Engelska, 2019-12-18
1399
Köp
Spara som favorit
Finns även som
Visa alla 2 format & utgåvor
This volume provides the essential vocabulary currently employed in discourses on the future in 50 contributions by renowned scholars in their respective fields, which examine future imaginaries across cultures and time. Not situated in the field of "futurology" proper, it comes at future studies 'sideways' and offers a multidisciplinary treatment of a critical futures' vocabulary. The contributors have their disciplinary homes in a wide range of subjects - history, cultural studies, literary studies, sociology, media studies, American studies, Japanese studies, Chinese studies, and philosophy - and critically illuminate numerous discourses about the future (or futures), past and present. In compiling such a critical vocabulary, this book seeks to foster conversations about futures in study programs and research forums and offers a toolbox for discussing them with an adequate degree of complexity.
Visa hela texten

Heike Paul is Chair of American Studies at FAU Erlangen-Nurnberg, Germany. She is the author of The Myths That Made America: An Introduction to American Studies (2014) and the co-editor of The Comeback of Populism: Transatlantic Perspectives (2019). She is currently Director of the Bavarian American Academy in Munich. She previously served as Vice-President of the German Association for American Studies (2014-2017). In 2018, she was awarded the Leibniz-Prize by the German Research Foundation.