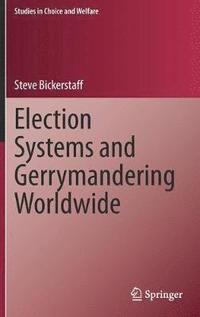 av Steve Bickerstaff
Inbunden Engelska, 2020-05-31
799
Köp
Spara som favorit
Skickas inom 10-15 vardagar.
Fri frakt inom Sverige för privatpersoner.
Kan tyvärr inte längre levereras innan jul.
Finns även som
Visa alla 1 format & utgåvor
This book explores the similarities and differences among national election systems around the globe and sheds light on how election systems are susceptible to gerrymandering, which is the process by which an incumbent or a political party attempts to manipulate the boundaries of electoral districts for their own advantage. Presenting research showing that some of the worst electoral-system manipulation occurs in the oldest established democracies, the book explores how nations have modified the form of government to meet local conditions and how democracy is threatened by gerrymandering.
Visa hela texten

Robert S. (Steve) Bickerstaff started his professional career with the State of Texas as a Parliamentarian of the State Senate, Director of the State Office of Constitutional Research, and Assistant Attorney General. In 1981 he left the state's employment and founded the private law firm of Bickerstaff, Heath and Smiley (now Bickerstaff, Heath, Delgado, Acosta). During his time as a private attorney he was involved in numerous prominent cases in Texas and other states. He left the law firm, which had expanded to 50 attorneys, over a decade ago, and is now retired. During much of his career, Steve was also an Adjunct Professor at the University of Texas Law School, teaching constitutional law and voting rights. He also taught as a Fulbright Scholar in Germany, was a Rockefeller Scholar in Residence at the Villa Serbelloni in Bellagio, Italy, was part of a Carter Commission study of elections in China, and lectured at 16 different universities in Europe, including the UK, and Scandinavia. Steve was on the governing board of several non-profits, including The Trustees for Alaska, the Board of Visitors for McDonald Astronomical Observatory, and West Texas Public Radio. He remains on the National Council of the National Parks Conservation Association. He is the author of six books and 26 law review articles or chapters in election law anthologies. Virtually all of this writing is on legal issues, such as voting rights and telecommunications regulation.

Preface.- The Many Disguises of Gerrymandering.- The World's Use of Electoral Districts.- Unequal Voting Power.- Equality in Voters or Persons.- The Upper Chamber of a Bicameral Legislature.- Proportional Representation and Electing Nationwide.- Gerrymandering by Untimely or Malapportioned Redistricting or Reallocation of Seats.- Gerrymandering within Fixed Electoral Districts.- Mixed Election Systems Combining Single-Member Electoral Districts with Proportional Representation Elections.- Protecting Access by Minorities and Women to the Political Process.-Criteria for Determining District Boundaries.- The Institution Responsible for Redistricting or Reallocating Seats in the National Legislature.- The Role of Courts.- Conclusion.