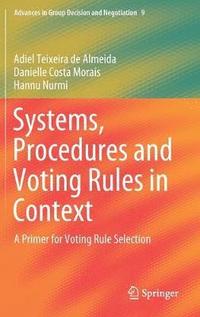 A Primer for Voting Rule Selection

av Adiel Teixeira De Almeida, Danielle Costa Morais, Hannu Nurmi
Inbunden Engelska, 2019-10-29
849
Köp
Spara som favorit
Skickas inom 7-10 vardagar.
Fri frakt inom Sverige för privatpersoner.
Finns även som
Visa alla 1 format & utgåvor
This book deals with the choice of methods to be applied in the decision processes within organizations. It discusses the use of voting procedures for group decision in business organizations, focusing on decision-making contexts. Within this book the reader explores the relevant part of the decision-making process consisting of choosing the voting procedures and recognizing the drawbacks of that procedure. This book includes a unique feature of providing a framework for choosing the voting procedure that is the most appropriate for a particular business decision process. The book is useful for a broad researcher audience dealing with the group decision making processes within business organizations and for practitioners and students working in the group decision and negotiation field.
Visa hela texten

Hannu Nurmi was the Associate Professor of Methodology of Social Sciences in University of Turku 1974 - 1995. Thereafter he became the chair holder of Political Science in the same university until his retirement in 2012. During the academic year 1972-73 he was a Fulbright-Hayes Scholar at the Johns Hopkins University. In 1978 Nurmi held a British Academy Wolfson Fellowship at University of Essex and from 1991 till 1996 he was the Dean of the Faculty of Social Sciences in University of Turku. In 1998 he was a Visiting Professor at University of Minnesota. Nurmi was nominated the Academy Professor of Academy of Finland for the period 2003-2008. He is a member of Academia Scientiarum Fennica (the Finnish Academy of Sciences and Letters) from 1982. From 2008 till 2011 he was the Director of Centre of Excellence in Public Choice Research of University of Turku. From 2012 he is Professor Emeritus in the same university. Nurmi's research interests include the theory of voting and electoral systems, applied game theory and causal modeling. Danielle Costa Morais is Associate Professor of Management Engineering Department at Universidade Federal de Pernambuco (UFPE) since 2007, Director of Post-Graduate Program of Management Engineering at UFPE (2008-2010 and 2013-currently), Director of the research group on Decision and Negotiation for Water Management (DNW) and researcher member of the CDSID (Center for Decision Systems and Information Development). She is Civil Engineering and received her Master and Ph.D. degrees in Management Engineering. She has been awarded a grant of Productivity in Research by CNPq (Brazilian NRC). Her research interest includes MCDM/A, Group Decision and Negotiation, Operational Research and Water Resources Management. She co-authored over 40 scientific papers in reviewed journals. She serves on the editorial board a few scholarly journals, such as Group Decision and Negotiation. She has been an active member of the main societies related to Operational Research, MCDM/A and Group Decision, and served the INFORMS MCDM section as a board member. Adiel Teixeira de Almeida is Full Professor of management engineering at Universidade Federal de Pernambuco and founding coordinator of the CDSID (Center for Decision Systems and Information Development). Before his current position, he worked in business organizations as engineer and manager, including project manager and program manager of R&D projects. He holds a PhD in management engineering from The University of Birmingham, UK. His main interests are in decision-making related to multiple objectives and group decision problems, which includes methodological issues and applications. Also, he has been working as a consultant and with R&D projects for private and public organizations, where he has applied decision models in many contexts, such as: risk analysis, reliability and maintenance, project portfolio, R&D project portfolio, project management, strategic modeling, outsourcing, information systems, supply chain, and water management. He authored or co-author over 120 scientific papers in reviewed journals related to a variety of topics such as: Operational Research, Group Decision and Negotiation (GDN), Decision Systems, MCDM/A (Multicriteria Decision Making and Aid), Risk, Reliability, Maintenance, Safety, Quality, and Water Resources. He serves on the editorial board of some scholarly journals, including: GDN Journal (as Departmental co-Editor of Management Science), IMA Journal of Management Mathematics, International Journal of Decision Support System Technology and EURO Journal on Decision Processes. He has been an active member of the main societies related to Operational Research, Group Decision, MCDM/A topics. Currently, he serves the GDN Section of INFORMS as Vice-President and served, until 2019, the council of the MCDM Section of INFORMS and the Executive Committee of the International Society on Multiple Criteria Decision Making. He