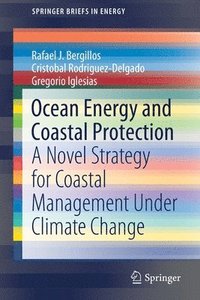 A Novel Strategy for Coastal Management Under Climate Change

av Rafael J Bergillos, Cristobal Rodriguez-Delgado, Gregorio Iglesias
Häftad Engelska, 2019-10-07
679
Köp
Spara som favorit
Finns även som
Visa alla 1 format & utgåvor
This book presents the innovative concept of the dual function of wave farms as both renewable energy generators and coastal protection elements against erosion and flooding. Developing renewable energy is one of the most pressing targets for society in the coming decades due to the finite nature of fossil fuels, their high costs, and the environmental impacts of their exploration and use, including climate change and the subsequent sea-level rise. Wave energy is one of the most promising renewable energy sources, thanks to its huge potential and low impact on the environment. As such, this book discusses the development and application of artificial intelligence to optimise wave farm location and layout, assesses the influence of the wave energy converter geometry on coastal protection against erosion and flooding, and analyses how the performance of wave farms as coastal defence elements is affected by climate change and sea level rise. The concepts, methods and conclusions presented are helpful to students, researchers, academics, engineers, designers, stakeholders and managers around the globe interested in wave energy, coastal engineering, and coastal management.
Visa hela texten

Rafael J. Bergillos is a postdoctoral researcher at the University of Cordoba (Spain). He has a M.Eng. in Civil Engineering (2011), an M.Sc. in Management of Ports and Coastal Zones (2013), an M.Sc. in Management of River Basins (2014), and a Ph.D. in Environmental Hydraulics (2017). His main research interests include is the study of the dynamics of coastal areas, covering theoretical fundamentals, analysis of experimental observations, numerical modelling applications, and proposal of management recommendations. He has published more than 20 papers in respected journals and contributed to over 25 prestigious national and international conferences. He has been a visiting researcher at leading international institutions in the field of coastal engineering and is currently involved in several national and international R+D projects. He has reviewed papers submitted to more than 15 journals listed in Journal Citation Reports. Cristobal Rodriguez-Delgado is a Maritime Engineer at PROES Consultores (Spain). He holds an M.Eng. in Civil Engineering (2015) and an M.Sc. in Environmental Hydraulics (2016), both from the University of Granada. He obtained his Ph.D. from the University of Plymouth in 2019. His main research interest is the study of the wave farm effects on the shoreline evolution through the joint application of wave propagation models, longshore sediment transport formulations, and the one-line model. He has published more than 10 journal papers and contributed to several national and international conferences. He has also been involved in several national and international R+D projects. Gregorio Iglesias is Professor of Marine Renewable Energy at University College Cork (Ireland) and Honorary Professor of Coastal Engineering at the University of Plymouth (UK). He works in ocean energy (resource characterization, impact assessment, development of wave energy converters, combined wave and wind systems), coastal processes (estuarine hydraulics, beach morphodynamics), and coastal and port structures (breakwater design and testing). Professor Iglesias has patented a new type of wave energy converter (WaveCat), a hybrid wave-wind system, coordinated numerous laboratory tests on wave energy converters and breakwaters, and pioneered the application of artificial intelligence to coastal structures, beach morphology, infragravity waves, and oil booms. He is a member of the IEC Technical Committee in charge of the standards for wave energy device development (scale model testing) and of the panel in charge of the Spanish Standards for Maritime Works (ROM). He regularly acts as a reviewer for a number of international journals and research councils and is a member of various editorial boards and the Subject Editor of Energy (Elsevier) for wave, tidal, and hydropower. Professor Iglesias has published over 100 journal papers, and as Principal Investigator he has secured over EURO12M of research funding. His h-index is 37.