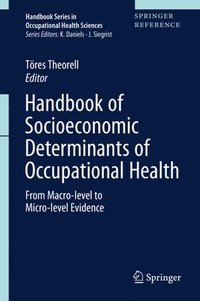 From Macro-level to Micro-level Evidence

av Toeres Theorell
Inbunden Engelska, 2020-08-13
6002
Köp
Spara som favorit
This anthology provides readers of scientific literature on socioeconomic factors and working conditions with the newest knowledge in this field. Since our world is subjected to constant change in accelerating speed, scientific reviews and updates are needed. Fortunately, research methodology in epidemiology, physiology, psychology and sociology is also developing rapidly and therefore the scientific community can provide politicians and policy makers with increasingly sophisticated and exact descriptions of societal factors in relation to work. The anthology starts in the macro level sphere - with international perspectives and reviews related to working conditions in relation to political change (the fall of the Soviet Union) gender, age, precarious employment, national economy and retirement. Two chapters relate to national policies and activities in international organizations. The second part of the book relates to the meso level sphere - with reviews on social patterns in distributions of psychosocial and physical risks at work in general as well as reviews on noise, shift work, under/overemployment, occupational physical activity, job intensity (which may be a particularly important problem in low income countries), digitization in modern work, climate change, childhood determinants of occupational health in adult years and theoretical models currently used in occupational epidemiology - demand/control, effort/reward, organizational justice, psychosocial safety climate, conflicts, bullying/harassment. This part of the book ends with two chapters on interventions (one chapter on the use of cultural interventions and one on interventions and their evaluation in general) and two chapters on financial aspects of poor/good work environments and evaluations of interventions. In the third part of the book the micro level is addressed. Here mechanisms translating working conditions into physiology are discussed. This starts in general theory relating basic theories regarding energy storage and release to psychosocial theory (extension of demand control theory). It also includes regeneration physiology, autonomic nervous system function, immunology and adverse behaviour. Sections in the Handbook: Macro-level determinants of occupational health: Akizumi Tsutsumi, Meso-level determinants of occupational health: Morten Wahrendorf and Jian Li, Micro-level determinants of occupational health: Bradley J. Wright
Visa hela texten

Toeres Theorell M.D., Ph.D., became a physician in 1967 and has served in internal medicine, cardiology, and social medicine. His Ph.D. thesis subject in 1971 was critical life events in relation to myocardial infarction. He became professor of health care research in 1980 and professor of psychosocial medicine at the Karolinska Institute in 1995. After his retirement in 2006 he has been a scientific advisor at the Stress Research Institute at the University of Stockholm. Theorell's research areas have been epidemiology of psychosocial factors in relation to cardiovascular and psychiatric disease, endocrinological and cardiovascular stress mechanisms, and intervention research. Theorell has published 755 scientific articles and books/book chapters. 470 of those are available in the international medical data base medline (pubmed). He is a member of the Academia Europeae. During later years, he published research in the area of health effects of cultural activities.