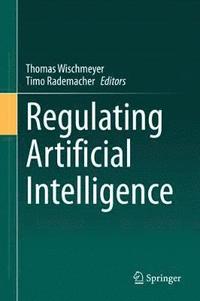 av Thomas Wischmeyer, Timo Rademacher
Inbunden Engelska, 2019-12-10
1259
Köp
Spara som favorit
Skickas inom 3-6 vardagar.
Fri frakt inom Sverige för privatpersoner.
Finns även som
Visa alla 1 format & utgåvor
This book assesses the normative and practical challenges for artificial intelligence (AI) regulation, offers comprehensive information on the laws that currently shape or restrict the design or use of AI, and develops policy recommendations for those areas in which regulation is most urgently needed. By gathering contributions from scholars who are experts in their respective fields of legal research, it demonstrates that AI regulation is not a specialized sub-discipline, but affects the entire legal system and thus concerns all lawyers. Machine learning-based technology, which lies at the heart of what is commonly referred to as AI, is increasingly being employed to make policy and business decisions with broad social impacts, and therefore runs the risk of causing wide-scale damage. At the same time, AI technology is becoming more and more complex and difficult to understand, making it harder to determine whether or not it is being used in accordance with the law. In light of this situation, even tech enthusiasts are calling for stricter regulation of AI. Legislators, too, are stepping in and have begun to pass AI laws, including the prohibition of automated decision-making systems in Article 22 of the General Data Protection Regulation, the New York City AI transparency bill, and the 2017 amendments to the German Cartel Act and German Administrative Procedure Act. While the belief that something needs to be done is widely shared, there is far less clarity about what exactly can or should be done, or what effective regulation might look like. The book is divided into two major parts, the first of which focuses on features common to most AI systems, and explores how they relate to the legal framework for data-driven technologies, which already exists in the form of (national and supra-national) constitutional law, EU data protection and competition law, and anti-discrimination law. In the second part, the book examines in detail a number of relevant sectors in which AI is increasingly shaping decision-making processes, ranging from the notorious social media and the legal, financial and healthcare industries, to fields like law enforcement and tax law, in which we can observe how regulation by AI is becoming a reality.
Visa hela texten

Thomas Wischmeyer is an assistant professor for public law and information law at the University of Bielefeld. He has been an academic visitor to several law schools, including Yale Law School and the Jean Monnet Center of New York University School of Law. Thomas Wischmeyer publishes and teaches on European and German constitutional law, administrative law and legal theory. His current research focuses on IT security and the role of law in the information society. Timo Rademacher is Assistant Professor of Public Law and New Technologies at the University of Hannover. He has obtained his degrees - inter alia - from the Universities of Heidelberg (Dr. iur.) and Oxford (MJur). In Hannover, he publishes on and teaches European and German constitutional and information law. His current research aims at the development of a regulatory framework for the use of Big Data analytics by State and EU public bodies.