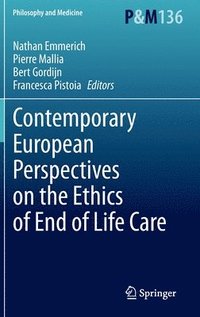 Contemporary European Perspectives on the Ethics of End of Life Care

av Nathan Emmerich, Pierre Mallia, Bert Gordijn, Francesca Pistoia
Inbunden Engelska, 2020-05-13
1109
Köp
Spara som favorit
Skickas inom 10-15 vardagar.
Fri frakt inom Sverige för privatpersoner.
Finns även som
Visa alla 1 format & utgåvor
This book examines the ethics of end of life care, focusing on the kinds of decisions that are commonly made in clinical practice. Specific attention is paid to the intensification of treatment for terminal symptoms, particularly pain relief, and the withdrawal and withholding of care, particularly life-saving or life-prolonging medical care. The book is structured into three sections. The first section contains essays examining end of life care from the perspective of moral theory and theology. The second sets out various conceptual terms and distinctions relevant to decision-making at the end of life. The third section contains chapters that focus on substantive ethical issues. This format not only provides for a comprehensive analysis of the ethical issues that arise in the context of end of life care but allows readers to effectively trace the philosophical, theological and conceptual underpinnings that inform their specific interests. This work will be of interest to scholars working in the area as well as clinicians, specialists and healthcare professionals who encounter these issues in the course of their practice.
Visa hela texten

Nathan Emmerich is a Research Fellow in Bioethics in the Australian National University's Medical School. He was previously a Postdoctoral Research Fellow in Ethics and End of Life Care at the Institute of Ethics, Dublin City University, and a Visiting Research Fellow at Queen's University Belfast. He has a background in Philosophy and took his PhD, which concerned the connection between the informal moral socialisation of medical students and their formal medical ethics education, under the supervision of medical sociologist. His work is interdisciplinary in nature and he has published on ethical expertise, social science research ethics and in bioethics more generally. He tweets at @BioethicsAUS. Pierre Mallia is Professor of Family Medicine and Biomedical Ethics at the University of Malta. He is attached to Malta's Geriatric Karen GrechHospital as a Clinical Ethicist and has published numerous papers and publications in Ethics, including on ethical issues with regard to aging. He is Chairman of the Dept. of Health's Health Ethics Committee, and the Minister of Health's Bioethics Consultative Committee. He is also the Ethics Advisor to the Medical Council of Malta and coordinates the University of Malta's Bioethics Research Programme at the Medical School and was former Hon. Secretary to the National Bioethics Consultative Committee and founded and coordinates the Medical Law Unit in the Faculty of Laws. He is the President of the Malta College of Family Doctors and was awarded a Fellowship of the Royal College of General Practitioners (UK) for successfully introducing post graduate training and the MRCGP (INT) qualification in Malta. The Royal College of Physicians of London has also awarded him an honorary membership for advancing medicine in Malta. Professor Mallia is a visiting Professor at the Laennec University of Lyon and regularly visits the Dept. of Health Sciences at the University of Maastricht and the Istituto Universitario di Sophia (Florence, Italy) with which he is collaborating to promote a theory of dialogue in bioethics. He has been invited by UNESCO to describe his method of teaching and chosen as the 'regional bioethics expert' in the Mediterranean. He is frequently invited as a keynote speaker in international meetings. He has participated in several FP projects including Euroscreen, Privireal, Privileged, BioTEthed, Patient-Partner, EUPATI and others and has been invited by the EC to give talks in Bratislava and Bucharest. He also lectured at the United Nations Institute on Aging (INIA) in their diploma in Gerontology. Bert Gordijn is Professor and Director of the Institute of Ethics at Dublin City University in Ireland. He has studied Philosophy and History in Utrecht, Strasbourg and Freiburg in Breisgau. In 1995 he was awarded a doctorate in Philosophy from the Albert-Ludwigs-Universitat Freiburg, followed by a doctorate in Bioethics from the Radboud University Nijmegen in 2003. Bert has been a Visiting Professor at Lancaster University (UK), Georgetown University (USA), the National University of Singapore, the Fondation Brocher (Switzerland), and Yenepoya University (Mangalore, Karnataka, India). He has served on Advisory Panels and Expert Committees of the European Chemical Industry Council, the European Patent Organisation, the Irish Department of Health and UNESCO. Bert is Editor-in-Chief of two book series: "The International Library of Ethics, Law and Technology" and "Advances in Global Bioethics" as well as a peer reviewed journal: "Medicine, Health Care and Philosophy", all published by Springer. He is Secretary of the European Society for Philosophy of Medicine and Healthcare and President of the International Association of Education in Ethics. Francesca Pistoia is Associate Professor of Neurology at the University of L'Aquila. She completed her degree summa cum laude in medicine and surgery, and thereafter specialized in neurology summa cum laude, at t