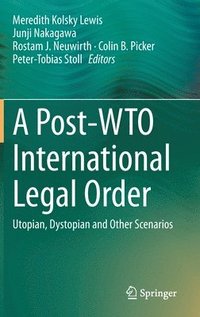 Utopian, Dystopian and Other Scenarios

av Meredith Kolsky Lewis, Junji Nakagawa, Rostam J Neuwirth, Colin B Picker, Peter-Tobias Stoll
Inbunden Engelska, 2020-06-17
1389
Köp
Spara som favorit
Skickas inom 3-6 vardagar.
Fri frakt inom Sverige för privatpersoner.
Finns även som
Visa alla 1 format & utgåvor
This book provides readers with a unique opportunity to explore how the international economic legal order (IELO) may look in a post-WTO world. The substance of this book presupposes (whether correct or not) that the WTO either: (a) Stagnates into the foreseeable future (Doha withers, no new Rounds, at best minor amendments, little new jurisprudence, effective collapse of the DSB); or (b) Falls apart completely. While neither is desirable, the book underlines that it must be conceded that neither is inconceivable. The collapse of the Soviet Union tells us that anything is possible (in 1986 no one foresaw the end of the Cold War - clearly it was a much more significant event than would be the case for the demise of the WTO and the current international economic legal order (IELO)). Similarly, just a year or two before Brexit or the election of US President Donald Trump, no one foresaw those two eventualities. Consequently, a worst-case scenario for the future of the WTO cannot be ignored - rather, it must be explored, as has been done in this book. Indeed, despite most IEL academics' commitment to multilateralism and specifically to a vibrant and dynamic WTO, academics in the field are now beginning to seriously discuss what a post-WTO world could look like (and it was the project behind this book that first launched those discussions). Accordingly, this examination of the post-WTO world will be of great value to practitioners, governmental and international officials and scholars in the IELO. This is particularly so in an era of increasingly rapid change, during which legal scholarship must also address the future if it wants to contribute creative solutions to the resolution and management of the many serious contemporary problems facing our field.
Visa hela texten

Prof. Meredith Lewis Kolsky joined the Faculty of Law in January 2005. Meredith is the Co-Director of the New Zealand Centre of International Economic Law. She teaches international trade law at the undergraduate and master's level and has recently provided international trade law training to Indonesian law professors as well as to New Zealand and Vietnamese government officials. Meredith is a member of the International Trade Law Committee of the International Law Association; a Founding Executive Committee member and current Executive Vice President of the Society of International Economic Law; and a member of the Asian WTO Research Network. Before joining Victoria, Meredith was a senior associate practising litigation and international trade with Shearman & Sterling LLP in Washington DC and Tokyo. Her practice included defending foreign corporations in antidumping, countervailing duty, and safeguard actions; counselling corporations and foreign governments on a wide variety of WTO and NAFTA-related issues; and representing clients in commercial litigation and arbitration. Meredith's research interests include international economic law; international dispute settlement; and alternative dispute resolution. Prof. Junji Nakagwa has written extensively in the field of international economic law. His publications include: Commentaries on the TPP (Trans-Pacific Partnership) (Japan Tariff Association, 2019, in Japanese); Asian Perspectives on International Investment Law (ed., Routledge, 2019); Nationalization, Natural Resources and International Investment Law (Routledge, 2017); Transparency in International Trade and Investment Dispute Settlement (ed., Routledge, 2013); WTO: Beyond Trade Liberalization (Iwanami shoten, 2013, in Japanese); International Harmonization of Economic Regulation (Oxford University Press, 2011), Multilateralism and Regionalism in Global Economic Governance (ed., Routledge, 2011); Anti-Dumping Laws and Practices of the New Users (ed., Cameron May 2007); and Managing Development: Globalization, Economic Restructuring and Social Policy (ed., Routledge, 2006). Rostam J. Neuwirth is a Professor and the Head of the Department of Global Legal Studies at the Faculty of Law of the University of Macau. He has published in many peer-reviewed international journals in the field of international economic law and related areas, and recently co-edited an academic book on the cooperation between the BRICS countries (Brazil. Russia, India, China, South Africa) with Cambridge University Press (2017) and a monograph with Routledge (2018). Neuwirth is also a member of the editorial boards of the journal "Law, Technology and Humans" (https://lthj.qut.edu.au/), the "BRICS Law Journal"(https://www.bricslawjournal.com/jour), and the book series "Law and Visual Jurisprudence" (Springer: https://www.springer.com/series/16413). Prof. Colin B. Picker is the Pro Vice Chancellor (South Western Sydney) and Dean, School of Law, Faculty of Law, Humanities and the Arts, at the University of Wollongong. Previously, Professor Picker was at UNSW Law, serving in many capacities including as Associate Dean (International); Director (and founder) of the China International Business and Economic Law (CIBEL) Initiative; and Director of the IBEL Stream of the LLM. Prior to joining UNSW, Professor Picker was the Daniel L. Brenner/UMKC Scholar & Professor of Law at the University of Missouri - Kansas City School of Law. Professor Picker entered academia in 2000, after practicing in the Washington, D.C., law firm Wilmer, Cutler & Pickering. Professor Picker's practice included transnational & trade litigation, international transactions and international congressional policy work. numerous other publications in international economic law, relevant for this book proposal Picker has previously successfully edited six legal academic books: two with Hart (2018, 2008), one with Springer (2016); o

Part I: The Post-WTO: Introduction.- An Introduction to Utopian and Dystopian Post-WTO Regimes and Environments.- Part II: The Post-WTO: Macro and Theoretical Perspectives.- To Dystopia and Beyond: The WTO in a Warming Megaregional World.- Narrowed Down Utopia: Adjusting the WTO to a Changing Trade Environment.- Waiting for Cordell Hull.- GAIA 2048-A 'Glocal Agency in Anthropocene': Cognitive and Institutional Change as 'Legal Science Fiction'.- If the WTO Were to Break Down Completely, Would We Stoop and Build It Up with Worn-Out Tools?.- Part III: The Post-WTO: Dispute Settlement.- The EU Approach to Overcome the WTO Dispute Settlement Vacuum: Article 25 DSU Interim Appeal Arbitration as a Bridge Between Renovation and Innovation.- Like a Rolling Stone: Exploring Viable Options for the WTO Dispute Settlement Mechanism to Evolve Forward in the Post-WTO Era.- What Can We Learn from Our Struggling Cousin?: Recent Discussions on Reform of International Investment Law and Investment Dispute Settlement Proceedings.- Reaching for Utopia, Geneva as Inspiration for Investment Disputes?.- A Possible Hierarchy of Dispute Settlement Systems?.- Part IV: The Post-WTO: Specific International Economic Law Issues.- The Concern with Non-concerns: For the End of Trade Dystopia.- The Rise of Import Substitution Subsidies and Local Content Requirements in a Dystopian WTO 2.0 Regime.- A Development-Driven Post WTO World.- Saving the World Trade Order from the Bottom Up: A Role for Preferential Trade Agreements.- A New International Trade Framework for Digital Assets.