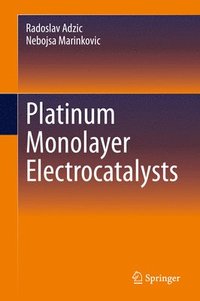 av Radoslav Adzic, Nebojsa Marinkovic
Inbunden Engelska, 2020-08-12
1377
Köp
Spara som favorit
Skickas inom 7-10 vardagar.
Gratis frakt inom Sverige över 159 kr för privatpersoner.
This book describes a science and technology of a new type of electrocatalysts consisting of a single atomic layer of platinum on suitable supports. This development helped overcome three major obstacles-catalysts' cost, activity, and stability-for a broad range of fuel cell applications. The volume begins with a short introduction to the science of electrocatalysis, covering four reactions important for energy conversion in fuel cells. A description follows of the properties of metal monolayers on electrode surfaces, and underpotential deposition of metals. The authors then describe the concept of Pt monolayer electrocatalysts and its implications and their synthesis by galvanic displacement of less-noble metal monolayers and other methods. The main part of the book presents a discussion of catalysts' characterization and catalytic properties of Pt monolayers for the four main reactions of electrochemical energy conversion: oxygen reduction and oxidation of hydrogen, methanol and ethanol. The book concludes with a treatment of scale-up syntheses, fuel cell tests, catalysts' stability and application prospects.
Visa hela texten

Dr. Radoslav Adzic is a Senior Chemist Emeritus at Brookhaven National Laboratory and Adjunct Professor at Stony Brook University. After graduating from the University of Belgrade in 1974 with a Ph.D. in chemistry he held various positions at the University of Belgrade becoming professor in 1990, and served as director of the Institute of Electrochemistry since 1993. From 1988 to 1990 he was Visiting Professor at Case Western Reserve University. He is a Fellow of the Electrochemical Society and of Fellow of the International Society of Electrochemistry. Dr. Adzic is a correspondent member of the Serbian Academy of Sciences and Arts, a Foreign Member of the Academy of Engineering Sciences of Serbia, and a member of the International Academy of Electrochemical Energy Science. He has authored more than 300 scientific publications in the fields of surface electrochemistry and electrocatalysis and has 20 U.S. patents. Some of his awards and recognitions include Annual Award of Belgrade for Natural Sciences 1983, the Science and Technology Award from Brookhaven National Laboratory in 2005, the SciAm 50 Award in 2007, the U.S. Department of Energy's Hydrogen R&D Award in 2008 and in 2012, the "R&D 100" Award in 2012. The Symposium Electrocatalysis 9 at the 333rd Electrochemical Society Meeting was held in his honor. According to Thomson Reuters he was a highly cited researcher in 2016, 2017, 2018. Nebojsa Marinkovic obtained his PhD in Physical chemistry in 1992 at University of Belgrade. After postdoctoral experiences at University of Louisville and University of California, Davis he moved to Brookhaven National Laboratory to study electrocatalytic processes on noble metals. Currently he is an associate scientist at Columbia University and a member of Synchrotron Catalysis Consortium, a contributing user group that supports research at National Synchrotron Light Source II at BNL. He is also adjunct associate professor of chemistry at State University of New York at Riverhead. Nebojsa Marinkovic's research involves promoting and utilization of synchrotron-based methods to nano-scale metal and metal oxide materials of interest for catalytic reactions, particularly those that can be integrated with complementary benchtop techniques for in-situ experiments. He authored over 100 scientific papers and book chapters, served a section editor for Encyclopedia of Applied Electrochemistry and gave numerous invited lectures and presentations.