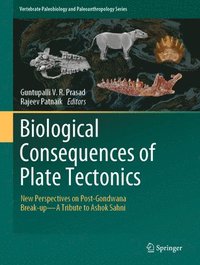 av Guntupalli V R Prasad, Rajeev Patnaik
Inbunden Engelska, 2020-11-24
1377
Köp
Spara som favorit
Skickas inom 7-10 vardagar.
Gratis frakt inom Sverige över 159 kr för privatpersoner.
Finns även som
Visa alla 1 format & utgåvor
This book recognizes and celebrates the contributions of Professor Ashok Sahni to the field of paleontology. Prof. Sahni established a School of Vertebrate Palaeontology at Panjab University, Chandigarh, India, where he trained many of today's vertebrate paleontologists of India. The book covers topics on evolutionary patterns, macroevolutionary events, origination and radiation events, changes in physical environments & climate and their implications for biodiversity dynamics, intercontinental affinities and biogeographic connections in a plate tectonic framework. The book begins by exploring India in the age of the dinosaurs, discussing new fossil remains from the Jurassic Era, then moves through the Cretaceous and Eocene to provide a picture on faunal and floral changes in Gondwanaland in the context of plate tectonics. Furthermore, the book explores the evolutionary patterns and biotic dispersals that resulted from the northward drift of Indian plate during the Cretaceous and its collision with Asia in the Eocene. The respective chapters reveal the role of plate tectonics and climate in shaping the geographical distribution of plants and animals in Gondwana, specifically in India, as well as the post-India/Asia collision implications for biodiversity changes and biogeography in the region's continental environments. Given its scope, the book will appeal to vertebrate paleontologists, evolutionary biologists, and paleobiogeographers.
Visa hela texten

Dr. Guntupalli V.R. Prasad received his Ph.D. from Panjab University, Chandigarh in the year 1986. He is a former Professor at the University of Jammu and Indian Institute of Science Education & Research (Kolkata). He is presently a Professor in the Department of Geology, University of Delhi, India. Prof. Prasad has more than 34 years teaching experience at Graduate and undergraduate level. A vertebrate paleontologist by training, he has been working for the last three and half decades on the evolution of Mesozoic vertebrates of India using form and function of vertebrate fossils. Prasad's research has focused primarily on biodiversity changes during the time span of Deccan volcanism which brought many new species of fishes, amphibians, reptiles and mammals to light and also provided paleontological constraints on the age of initiation and duration of Deccan Volcanism. His research has also thrown light on faunal dispersals and biogeographic linkages between the physically isolated and rapidly northward drifting Indian plate and other landmasses. Dr. Prasad's findings of diverse mammalian groups from the Jurassic and Cretaceous of India have firmly placed India on Mesozoic mammalian map of the world. Author of more than 100 scientific papers published in leading journals in his field of specialization as well as high impact journals like Nature, Science, Nature Communications, and Proceedings of National Academy of Sciences, Prof. Prasad received Shanti Swarup Bhatnagar Prize, India's highest science award, for his outstanding contributions in the field Vertebrate Paleontology. Other recognitions received by Prof. Prasad include J.C.Bose National Fellowship, National Geoscience Award, L. Rama Rao Birth Centenary Award, and National Award in Geosciences & Technology. He has been honored with the Fellowship of the Indian National Science Academy (FNA), Indian Academy of Sciences (FASc.), National Academy of Sciences (FNASc.), and Academy of Sciences for the Developing World (TWAS). Dr. Rajeev Patnaik did his Ph.D at Panjab University, Chandigarh and Post-Doctoral fellowships at Palaontologische Museum Munchen, Ludwig-Maximilians-Universitat, Germany and Institut des Sciences de l'Evolution de Montpellier, France. By integrating aspects of stable isotopes, microwear, morphometrics, cladistics and enamel microstructure, he has been able to contribute towards the understanding of diet and evolution of some Indian fossil mammals such as murine rodents and primate/hominins. He has also worked on the impact of climate change, palaeoecology, palaeobiogeography and geological context of Indian Neogene mammals with particular focus on the hominoids. He and his colleagues discovered new hominoids/primates, ostrich-like eggshells, new pelican and darter fossils from the Siwaliks (subhimalaya); Late Cretaceous rice from central India; and Miocene mammals from the Baripada Beds of Odisha. He has published over 100 research papers in reputed journals and has served as Associate Editor for scholarly journals such as Journal of Human Evolution, Current Science and Journal of the Geological Society of India. In 2016 he was awarded the prestigious National Geoscience Award by the Honourable President of India and in 2019 was elected as a Fellow of the Indian Academy of Sciences.

1 The Age of Dinosaurs in India.- 2 New fossil evidence for the presence of ornithischian and saurischian remains in the Jurassic of India.- 3 A minuscule tribosphenic mammal from an Early Cretaceous palaeopolar location of Australia.- 4 The largest toothed monotreme (new genus new species) from the early Cretaceous of Lightning Ridge, NSW, Australia.- 5 Molluscan fauna from the Upper Cretaceous Deccan intertrappean beds of central India: palaeobiogeographic significance.- 6 Chelonian Pelomedusoides remains from the Late Cretaceous of southwestern India: Systematics and palaeobiogeographical implications.- 7 The global affinities of Cretaceous and Paleogene Indian faunas: complex biogeography of a subcontinental raft.- 8 Anuran lissamphibians and squamate reptiles from Upper Cretaceous (Maastrichtian) Deccan intertrappean sites from central India, with a review of a lissamphibians and squamates diversity in the northward drifting Indian plate.- 9 Plant-derived biomarker signatures during the northward flight of India.- 10 Isolated Africa: Review and a palaeobiological scenario.- 11 Biogeography of Eocene mammals, continental and marine, in relation to the tectonic history of Indo-Pakistan.- 12 New specimens of Frugivastodon (Mammalia: Apatotheria) from the early Eocene of India confirm its apatemyid status and elucidate dispersal of Apatemyidae.- 13 Indohyus, endemic radiation of raoellid artiodactyls after continental collision in the Eocene of India and Pakistan.- 14 Do the size variation(s) within non-volant mammals and the known evolutionary relationship(s) of the large-sized perissodactyls from the Cambay Shale (western India) point to a short-lived corridor for secular migration(s) between India and Eurasia prior to ~54.5 Ma?.- 15 Parallel evolution of giant Anseriformes (Aves) in the Cenzoic of Laurasia, South America and Australia.- 16 Depositional biofacies of the Middle Eocene Subathu Formation of the Himalayan foreland basin in the context of India-Asia collision tectonics.- 17 Role of plate tectonics and climate in the geographical distribution of Indian late Cretaceous-early Palaeogene angiosperm flora.- 18 Post-collisional climate of India and implications for Neogene-Quaternary mammalian dispersals.- 19 Murine diversification in the Indian cradle: Coalescence of the Erimanthos-Apodus-Mus groups before 11 Ma.