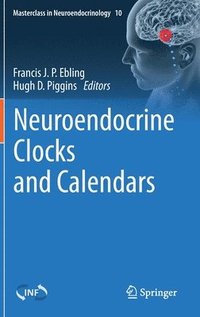 av Francis J P Ebling, Hugh D Piggins
Inbunden Engelska, 2021-01-05
1888
Köp
Spara som favorit
Skickas inom 7-10 vardagar.
Gratis frakt inom Sverige över 159 kr för privatpersoner.
Finns även som
Visa alla 1 format & utgåvor
This book explores how daily and seasonal rhythmicity is generated, how these rhythms are synchronised by our environment, and how they regulate the neuroendocrine systems that impact our physiology and behaviour. The constraints of surviving in a seasonal environment have shaped human evolution and migration, have shaped our societies and cultures, and continue to influence our everyday lives, health and wellbeing. Identifying the mechanisms whereby seasonal rhythmicity is generated and regulates the brain and body is not only important for understanding the natural world and relevant to animal production, it also offers many insights into the human condition. Each chapter is written by an international expert in the field of chronobiology. A historical perspective on how research into photoperiodism and rhythmicity progressed is initially provided, but the main focus of this book is on the remarkable studies in the last few decades that have unravelled the molecular and cellular machinery underpinning circadian and circannual timing. Topics covered include the role of melatonin in communicating seasonal information to the brain and pituitary gland, the neuroanatomical pathways in mammals, birds and fish by which changes in photoperiod reach the hypothalamus, the role of glial cells (tanycytes) and thyroid hormone in seasonal rhythmicity, neuroplasticity across seasons, effects of changing day length on mood, regulation of "clock" gene expression, and the role of the suprachiasmatic nucleus. This book will appeal to all students and researchers who wish to learn about current and past research on daily and seasonal rhythmicity. This is the tenth volume in the International Neuroendocrine Federation (INF) Masterclass in Neuroendocrinology series (Volumes 1-7 published by Wiley) that aims to illustrate highest standards and encourage the use of the latest technologies in basic and clinical research and hopes to provide inspiration for further exploration into the exciting field of neuroendocrinology.
Visa hela texten

Fran Ebling is Professor of Neuroendocrinology in the School of Life Sciences at the University of Nottingham, and served as chair of the British Society for Neuroendocrinology (2006-10). His research interests are in biological clocks and seasonal timing, particularly as they apply to the regulation of food intake, energy expenditure and reproduction. He graduated with a degree in Zoology from the University of Bristol, and caried out postgraduate studies at the University of Edinburgh with Gerald Lincoln establishing the role of melatonin in timing seasonal reproduction in Soay sheep. His post-doctoral studies at the University of Michigan (USA) with Douglas Foster investigated the role of photoperiod in timing puberty in sheep. He was then appointed as a Royal Society University Research Fellow at the University of Cambridge where his interest in circadian rhythmicity developed, working with Michael Hastings and Joe Herbert. Since 2000 he has been at the University of Nottingham, and served as Course Director for Neuroscience degrees. Hugh Piggins is Professor and Head of School of Physiology, Pharmacology and Neuroscience at the University of Bristol He initially studied at the University of Edinburgh and graduated with a BSc in Psychology. Subsequently he worked as a research assistant in cognitive science before undertaking at PhD on behavioural effects of neuropeptides at the University of Ottawa in Canada. He then obtained fellowships from NSERC and MRC (Canada) to pursue post-doctoral studies on the neurobiology of circadian rhythms with Ben Rusak and Kazue Semba at McMaster and Dalhousie Universities. In 1996 he set up his own lab at King's College London, and then moved to the University of Manchester in 1998 where he focused on the roles of neuropeptides in the brain's master circadian clock in the suprachiasmatic nuclei (SCN). He used electrophysiological, neuroanatomical, and behavioural approaches to dissect the functions of gastrin-releasing peptide and vasoactive intestinal polypeptide in the suprachaismatic nucleus. His current research in Bristol seeks to investigate circadian clocks in other regions of the brain, and in peripheral tissues such as the heart.