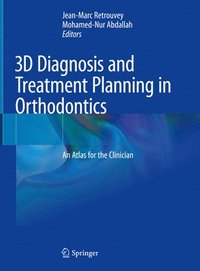 An Atlas for the Clinician

av Jean-Marc Retrouvey, Mohamed-Nur Abdallah
Inbunden Engelska, 2021-03-14
2499
Köp
Spara som favorit
Finns även som
Visa alla 1 format & utgåvor
This richly illustrated book is a wide-ranging guide to modern diagnostics and treatment planning in orthodontics, which are mandatory prior to the initiation of any type of comprehensive treatment. The importance of three-dimensional (3D) imaging techniques has been increasingly recognized owing to the shortcomings of conventional two-dimensional imaging in some patients, such as those requiring complex adult treatment and those with temporomandibular joint dysfunctions or sleep disturbances. In the first part of this book, readers will find clear description and illustration of the diagnostic role of the latest 3D imaging techniques, including cone beam computed tomography, intra-oral scanning, and magnetic resonance imaging. The second part explains in detail the application of 3D techniques in treatment planning for orthodontic and orthognathic surgery. Guidance is also provided on the use of image fusion software for the purposes of accurate diagnosis and precise design of the most appropriate biomechanical approach in patients with malocclusions.
Visa hela texten

Jean-Marc Retrouvey, DMD, MSc, FRCD (C), is the Leo Rogers Endowed Chair of the Orthodontic Department at the University of Missouri Kansas City. He is a RCDC (Royal College of Dentists of Canada) examiner, an NDEB advisor, member of the AAO, the American College of Dentists, The Angle East Society of Orthodontist, a Fellow in the Academie Dentaire du Quebec, and the past president of the Canadian Association of Orthodontists. As a teacher, he has received the McGill Dental Society and the Wood, Katz and Silverstone awards for excellence in teaching. Dr. Retrouvey also received the Bravo award for his impli- cation in teaching and research at McGill University. Dr. Retrouvey is also involved with HVO (Health Volunteer Overseas) in the development of blended teaching program for emerging countries and is president ot the International Foundation tor Dental Education, a nonprofit organization offering orthodontic course in developing countries. He is the principal investigator (PI) for the NIH-supported research project dental aspect of the Longitudinal Study of Osteogenesis Imperfecta and was the PI for the "Dental Malocclusion and Craniofacial Development in OI." These research projects are conducted by the Brittle Bone Disease Consortium from the RDCRN network of the NIH and have been renewed for a second phase. He is now PI for the NIH-supported project: Use of clear aligner for the treat- ment of dental malocclusion in individuals with osteogenesis imperfecta types III and IV. Mohamed-Nur Abdallah is a dental clinician and a biomaterial scientist. In addition to working in private practice, he is an Adjunct Associate Professor at the Division of Graduate Orthodontics at the University of Detroit Mercy and an Instructor at the Faculty of Dentistry/ University of Toronto. Dr. Abdallah obtained his dental degree from the University of Jordan and then worked as a general dentist for 3 years. He completed his first MSc degree focused on Biomaterials and his PhD in Craniofacial Health Sciences at McGill University in Canada. He then pursued an MSc/Orthodontic specialty program at the University of Toronto and worked as a graduate researcher at the Mt. Sinai Hospital (Lunenfeld-Tanenbaum Research Institute) in Toronto. Dr. Abdallah received numerous academic scholarships and awards, including the Orthodontic & Craniofacial Clinical and Translational Research Award from International Association for Dental Research (IADR) as well as several Graduate Excellence Awards in Dentistry and the Southern Ontario Surgical Orthodontic Study Club Award for the best clini- cal presentation. So far, he has authored and coauthored more than 35 anicles published in peer-reviewed journals and six book chapters as well as filed three patents.