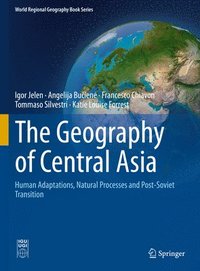 The Geography of Central Asia

av Igor Jelen, Angelija Buciene, Francesco Chiavon, Tommaso Silvestri, Katie Louise Forrest
Inbunden Engelska, 2021-03-03
2219
Köp
Spara som favorit
Finns även som
Visa alla 1 format & utgåvor
This book provides a profound geographical description and analysis of Central Asia. The authors take a synthetic approach in a period of critical transformation in the post-soviet time. The monograph analyzes comprehensively the physical and human geography as well as human-nature interactions of Central Asia with focus on Kazakhstan, Uzbekistan, Turkmenistan, Kyrgyzstan and Tajikistan. Natural processes are described at a systemic scale, focusing on ecological impacts and consequences and contemporary human adaptations and organization. It also discusses in which ways the human organizations try to apply solutions for their needs such as security, territorial management and resources renewability, material and functional needs, identity elaborations, culture and communication. The Geography of Central Asia appeals to scientists and students of regional geography and interested academics from other areas such as social, political, economic and environmental studies within the context of Central Asia. The book is also a very useful resource for field trips into this area.
Visa hela texten

Igor Jelen is Professor of Political and Economic Geography at the University of Trieste, Italy. After five years in marketing and consulting he worked as a researcher in political and economic geography at the University of Trieste. In 2014 he received the habilitation as a Full Professor. He frequently travelled to the Central Asian post-soviet countries, where he also stayed for extended periods, organizing fieldwork, starting from the early 90's. His further research topics are peripheral regions, especially remote and mountainous regions around the world, and corresponding development questions, borders and borderland questions and rivalries (e.g. the China-Russian-Central Asian borders), the European Union as well as other regional integration processes (especially form the point of view of security and defence), and globalization issues. Igor Jelen is a founding member of the ASIAC (Associazione per lo studio in Italia dell'Asia Centrale), and member of the editorial board of National Identities and of the Journal of Geography, Politics and Society; in 1992 he was a visiting scholar at the University of South Carolina in Columbia, SC, USA. And in 2011-2012 he was a visiting professor at the Leopold Franzens University of Innsbruck. Angelija Buciene is Professor of Physical Geography at Klaipeda University, Lithuania. She received her Diploma in Hydrology at Vilnius University in 1975 and her Scientific Agronomy Diploma at the Lithuanian Agricultural University in 1981, where she also received her Doctorate in 1984. Her habilitation was finished at Vilnius University in 2009. Her area of expertise are agrohydrology, rural landscape geography, environmental geography and sustainable development. She taught many courses, e.g., geospheres and physical processes, landscape geography and management, physical geography, landscape ecology, regions and regional development, theory and methodology in human geography and maritime geography. She is a member of the Lithuanian Association of Geographers and of the Association of Soil Researchers of Lithuania. She also serves as member of the editorial board of "Geography and Education: Science Almanac", the scientific journal of the Lithuanian University of Educational Sciences. She was a visiting researcher at Swedish University of Agricultural Sciences in 1992 and 1994. In 1998 she was awarded a Swedish Royal Scholarship.