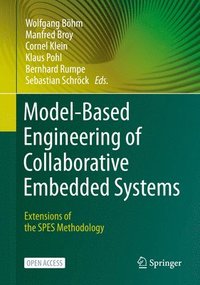 Extensions of the SPES Methodology

av Wolfgang Boehm, Manfred Broy, Cornel Klein, Klaus Pohl, Bernhard Rumpe
Inbunden Engelska, 2020-12-15
669
Köp
Spara som favorit
This Open Access book presents the results of the "Collaborative Embedded Systems" (CrESt) project, aimed at adapting and complementing the methodology underlying modeling techniques developed to cope with the challenges of the dynamic structures of collaborative embedded systems (CESs) based on the SPES development methodology. In order to manage the high complexity of the individual systems and the dynamically formed interaction structures at runtime, advanced and powerful development methods are required that extend the current state of the art in the development of embedded systems and cyber-physical systems. The methodological contributions of the project support the effective and efficient development of CESs in dynamic and uncertain contexts, with special emphasis on the reliability and variability of individual systems and the creation of networks of such systems at runtime. The project was funded by the German Federal Ministry of Education and Research (BMBF), and the case studies are therefore selected from areas that are highly relevant for Germany's economy (automotive, industrial production, power generation, and robotics). It also supports the digitalization of complex and transformable industrial plants in the context of the German government's "Industry 4.0" initiative, and the project results provide a solid foundation for implementing the German government's high-tech strategy "Innovations for Germany" in the coming years.
Visa hela texten

Wolfgang Boehm works at the Chair of Software and Systems Engineering at the Technical University of Munich since 2010. During this time, he was in charge of several research projects, among them the SPES projects SPES2020, SPES_XT, and CrESt. Prior to this appointment, he had worked as a System Software Engineer for the Private Networks Division of Siemens AG. Manfred Broy is full professor for Computer Science at the Institute for Computer Science of the Technical University of Munich. The core topic of his research is the development of complex software systems based on a solid scientific foundation, by means of well-elaborated processes, durable and flexible software architectures, and modern tools on the basis of mathematical and logical methods. He was awarded the Leibniz Preis in 1994 and bestowed the Order of Merit (Bundesverdienstkreuz) in 1996, and received the Konrad-Zuse-Medal for extraordinary services in Computer Science in 2007. Manfred Broy is a Max-Planck-Fellow, member of the German Academy of Science and Engineering and the German National Academy of the Sciences "Leopoldina". Cornel Klein is Research Program Manager within the Technology Field "Software and Systems Innovation" of Siemens Corporate Technology in Munich. He is currently leading a corporate research program on validation and engineering of intelligent and autonomous systems. Starting his career 1998 at Siemens Public Networks, he held several management and expert positions within the company and also represented Siemens in external partnerships like ITEA, ARTEMIS/ECSEL and SPES. He has gained an extensive knowledge in communications, cyber-physical and embedded systems, software- and systems engineering as well as in application domains like automotive, mobility and smart cities/smart buildings. Klaus Pohl is full professor for Software Systems Engineering at the University of Duisburg-Essen in Germany, as well as professor at the University of Limerick, Ireland. He is founding director of the Irish Software Engineering Research Centre Lero. His main research interests comprise Requirements Engineering, Service-Based Systems Engineering, Software Quality Assurance as well as Software Product Line Engineering. He is coordinator of the FP7 Network of Excellence S-Cube and member of a number of steering committees and boards of directors. Bernhard Rumpe is full professor for Software Engineering at the RWTH Aachen University, Germany. Earlier he held positions at INRIA/IRISA, Rennes, Colorado State University, TU Braunschweig, Vanderbilt University, Nashville, and TU Munich. His main interests are rigorous and practical software and system development methods based on adequate modeling techniques, including their applications in areas like e.g. autonomous cars, human brain simulation, energy management, juristic contract digitalization, production automation, and cloud infrastructures. He is co-founder of SoSyM the Models conference series, the Aachen Center for Systems Engineering and several Start-Ups. Sebastian Schroeck is working as senior expert and project manager at Corporate Sector Research and Advance Engineering of the Bosch Group. After studying Mechanical Engineering in Germany and Finland, he received a doctorate in engineering from the Helmut-Schmidt-University in Hamburg. His current fields of work are versatile production systems as well as national and international publicly funded projects. Furthermore, he is working as an independent expert for the European Commission.