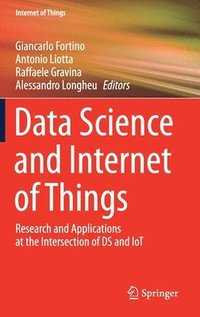 Data Science and Internet of Things

Research and Applications at the Intersection of DS and IoT

av Giancarlo Fortino, Antonio Liotta, Raffaele Gravina, Alessandro Longheu
Inbunden Engelska, 2021-02-19
1377
Köp
Spara som favorit
Skickas inom 7-10 vardagar.
Gratis frakt inom Sverige över 159 kr för privatpersoner.
Finns även som
Visa alla 1 format & utgåvor
This book focuses on the combination of IoT and data science, in particular how methods, algorithms, and tools from data science can effectively support IoT. The authors show how data science methodologies, techniques and tools, can translate data into information, enabling the effectiveness and usefulness of new services offered by IoT stakeholders. The authors posit that if IoT is indeed the infrastructure of the future, data structure is the key that can lead to a significant improvement of human life. The book aims to present innovative IoT applications as well as ongoing research that exploit modern data science approaches. Readers are offered issues and challenges in a cross-disciplinary scenario that involves both IoT and data science fields. The book features contributions from academics, researchers, and professionals from both fields.
Visa hela texten

Giancarlo Fortino (SM'12) is Full Professor of Computer Engineering at the Dept. of Informatics, Modeling, Electronics and Systems (DIMES) of the University of Calabria (Unical), Rende (CS), Italy. He has a Ph. D. degree and Laurea (MSc+BSc) degree in Computer Engineering from Unical. He is High-end Foreign Expert of China (term 2015-2018), Adjunct and Guest Professor at the Wuhan University of Technology (China), High-end Expert of HUST (China), CAS PIFI Visiting Scientist at Shenzhen (2019-2021), Distinguished Professor of Huazhong Agricultural University (China) and Associated Senior Research Fellow at the Italian National Research Council - ICAR Institute. He has been also Visiting Researcher and Professor at the International Computer Science Institute (Berkeley, USA, 97-99) and at the Queensland University of Technology (Australia, 2009), respectively. He is in the list of Top Italian Scientists (TIS) by VIA-academy and Guide2Research, with h-index=52 and 10000+ citations according to GS. According to the SciVal tool based on the Scopus database, in the last 5 years (2015-19), he is ranked N. 39 in the Computer Science field in the ranking of Top 500 authors, by Scholarly Output in the World, based on the FWCI index, is N. 1 in the Research Area "Hardware and Architecture" and N. 1 in the topic "Body Sensor Network; Smart Object; Interoperability". According to WoS, he has currently 12 highly cited papers and has been recently nominated Highly Cited Researcher 2020 by Clarivate. He is the director of the SPEME (Smart, Pervasive and Mobile Systems Engineering) Lab at DIMES, Unical and co-director of three joint-labs on Smart IoT technologies established with Wuhan University of Technology, Shanghai Maritime University, and Huazhong Agricultural University, respectively. He is also the director of the postgraduate master in "INTER-IoT: Integrator of Internet of Things Systems" and the Rector's delegate to international relations at Unical. His main research interests include Human-Machine Systems, Wearable Computing, Internet of Things computing and technology, agent-based computing, body area networks, wireless sensor networks, pervasive and cloud computing, multimedia networks, and mobile health systems. He participated to many local, national and international research projects and was also the deputy coordinator and scientific & technical project manager of the EU-funded (8M) H2020 INTER-IoT project. He authored 450+ publications in journals (200+ in ISI-impacted journals), conferences and books. He chaired 100+ Int'l conferences/workshops (he is the general chair of the 1st edition of the 2020 IEEE Human-Machine Systems conference), organized 60+ special issues in well-known ISI-impacted Int'l Journals, and participated in the TPC of about 500 conferences. He is the founding editor in chief of the IEEE Book Series on "Human-Machine Systems" and of the Springer Book Series on "Internet of Things: Technology, Communications and Computing", and currently serves (as associate editor) in the editorial board of IEEE Transactions on Human-Machine Systems, IEEE Transactions on Affective Computing, IEEE IoT Journal, IEEE Sensors Journal, IEEE SMC Magazine, IEEE Access, Information Fusion, Engineering Applications of Artificial Intelligence, Journal of Networks and Computer Applications and others. He is the recipient of the 2014 Andrew P. Sage SMC Best Transactions Paper award. He is Distinguished Lecturer of the IEEE Sensors Council for the period 2021-2023. He is the Chair of the IEEE SMC Italian Chapter, Member-at-large of the IEEE SMCS BoG, Member of the IEEE Press Board of Directors, and founding chair of the IEEE SMC Technical Committee on "Interactive and Wearable Computing and Devices". He is co-founder and CEO of SenSysCal S.r.l., a spin-off of Unical, developing innovative human-oriented IoT-based systems for e-health and domotics. Antonio Liotta is